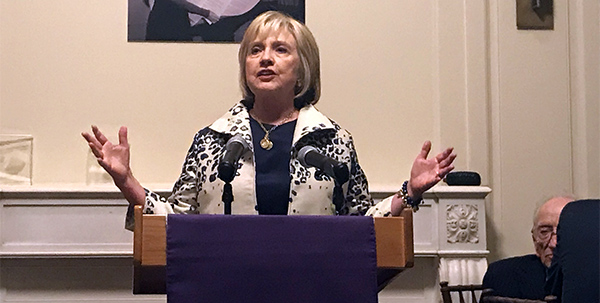 The ABA Center for Human Rights bestowed its inaugural Eleanor Roosevelt Prize for Global Human Rights Achievement to former U.S. Secretary of State Hillary Rodham Clinton and international criminal justice lawyer Benjamin B. Ferencz, who at 99 is the sole surviving prosecutor at the Nuremberg trials, during a ceremony Sept. 14 in New York.

With the blessings of the Roosevelt family, the center established the award to mark the 70thanniversary of the Universal Declaration of Human Rights, championed by Eleanor Roosevelt. The award is intended to recognize persons and organizations having a positive, enduring and global impact in advancing the principles set forth in the declaration, and will be awarded annually.

As the chair of the U.N. Human Rights Commission, Roosevelt was the driving force in creating the 1948 charter of liberties — known as the Universal Declaration of Human Rights. In 1946, she was appointed as a delegate to the United Nations by President Harry Truman, who became president after her husband Franklin D. Roosevelt’s death in 1945. She said after its passage: “We stand today at the threshold of a great event both in the life of the United Nations and in the life of mankind. This declaration may well become the international Magna Carta for all men everywhere.”

In presenting its first awards, the Center for Human Rights noted that Clinton, a former First Lady, has a long career of advocacy of the rights of women and girls while Ferencz is recognized globally as supporting international criminal justice and human rights. Both have dramatically improved the lives of millions around the world and followed a model set out by Roosevelt decades ago, the center noted.

“Eleanor Roosevelt is our adopted patron saint at the Center for Human Rights,” said CHR Chair Bernice Donald, a judge on the U.S. Court of Appeals for the Sixth Circuit. “Not just because we love her, but who she was and for what she meant to the international and national community. But also for what she had to say and how she boldly took a leadership stance on issues that really transformed the world.”

Tracy Roosevelt, the granddaughter of Franklin and Eleanor and an attorney in Washington, D.C., represented the family at the New York event, which took place at the Roosevelt House, the former double townhouse of Franklin, Eleanor and Sara Delano Roosevelt, the president’s mother. The house in the city’s Upper East Side was a wedding gift from Sara Delano Roosevelt to the couple, and is now owned by Hunter College and houses its public policy institute.