Download a printable PDF of this article. (membership required).

Consider the following question, which comes up rather frequently. Suppose you represent a client who is scheduled to be questioned—perhaps at police headquarters, or at a hearing, trial, or deposition—and you have advised your client to assert the Fifth Amendment right to refuse to give testimony. Just what words should you advise your client to speak when the moment comes and it is time to invoke that right? 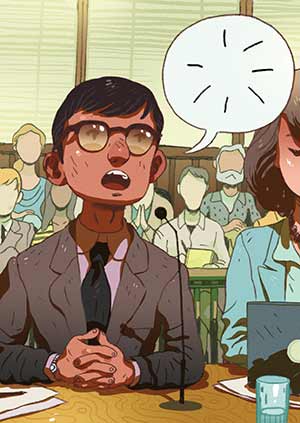 As every experienced lawyer knows, this question has a standard answer that lawyers almost universally advise clients to intone: “On the advice of counsel, I respectfully decline to answer on the ground that my answer may tend to incriminate me.” But are those really the best words for the judge or jury to hear emerge from your client’s mouth? Can we counsel our clients to do better than that?

After all, nothing in the Constitution compels a witness to use an official phrase when invoking the privilege against self-incrimination. “A witness’s answer could range from ‘I refuse to answer on the ground that my answer may tend to incriminate me’ to the more mundane ‘On the advice of counsel, I decline to answer.’” Evans v. City of Chicago, 513 F.3d 735, 740 n.4 (7th Cir. 2008). So why would you advise a client to state an answer that sounds more suspicious to the ear than others?

Let’s take the easiest case: If a criminal suspect remains silent after receiving his or her Miranda warnings, that silence is not admissible at the criminal trial either as substantive evidence of guilt, Miranda v. Arizona, 384 U.S. 436, 468 n.37 (1966), or for impeachment if he or she chooses to testify. Doyle v. Ohio, 426 U.S. 610 (1976). So the jury will not even learn that the defendant invoked the Fifth, much less how he or she did it.

But Doyle does not always require the exclusion of evidence that a witness exercised the right to remain silent. In some situations, a jury may be allowed to learn the precise words that your client spoke. For example, your client’s words are admissible in a criminal trial if the police can prove (or are at least willing to claim) that they never read your client his or her rights before your client communicated his or her insistence on remaining silent. Fletcher v. Weir, 455 U.S. 603 (1982). Your client’s assertion of the Fifth Amendment privilege also is admissible in any civil action or proceeding. Mitchell v. United States, 526 U.S. 314, 328 (1999).

In fact, in many civil trials—and even in criminal trials, as long as your client is not the accused—the court has the discretion to compel your client to take the stand and assert the privilege in the presence of the jury, which will then be invited to draw an adverse inference from that refusal. E.g., Hinojosa v. Butler, 547 F.3d 285 (5th Cir. 2008). It therefore may make a great difference just what your client says in explaining his or her refusal to answer a question on the basis of that privilege.

Yet, lawyers show little creativity in advising clients what to say in those circumstances. Witnesses regularly show up at hearings armed with a card containing talismanic phrasing reciting counsel’s advice that they decline because “my answer may tend to incriminate me.” But surely that cannot sound innocent to any ordinary juror.

When a witness refuses to answer and uses the word “incriminate,” most jurors will believe that the witness is saying, “I cannot tell you the truth without admitting my guilt.” Indeed, the Supreme Court has noted that “[t]he layman’s natural first suggestion would probably be that the resort to privilege in each instance is a clear confession of crime.” Lakeside v. Oregon, 435 U.S. 333, 340 n.10 (1978) (quoting 8 Wigmore, Evidence § 2272, at 426). Using the word “incriminate” only fuels a jury’s natural suspicions, just as it naturally encourages the cross-examiner to press, with rising excitement, for yet another seeming admission of guilt.

There is no good reason in this day and age to allow a client to say anything that sounds like such a damaging confession. The cards we give our clients to take into the grand jury room need to be brought into the 21st century. The next time you tell a witness what to say or read when refusing to answer a question on the basis of the Fifth Amendment, give the witness instead some version of the following:

On the advice of my lawyer, I respectfully decline to answer on the basis of the Fifth Amendment, which—according to the United States Supreme Court—protects everyone, even innocent people, from the need to answer questions if the truth might be used to help create the misleading impression that they were somehow involved in a crime that they did not commit.

That is a perfectly accurate statement of perhaps the most important function served by the Fifth Amendment. But how different it sounds from the statements of countless witnesses who are advised by their lawyers to recite that they cannot tell the truth without “incriminating” themselves.

The author is a professor at Regent Law School in Virginia Beach and the National Trial Advocacy College at the University of Virginia School of Law.