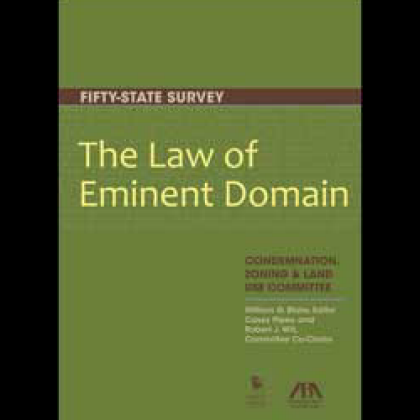 Dreaded to research, and appreciated only when finished, publically available fifty-state surveys now include what a preeminent practitioner of the subject referred to as the “dark corner of the law”—the law of condemnation or eminent domain. After an eight-year effort, the ABA Section of Litigation published this summer the Fifty-State Survey: The Law of Eminent Domain, which tips the scales at more than 600 pages.

The book’s purpose is to create a single resource for eminent domain practitioners while also providing concise answers to the typical questions faced by others who are not experienced in the field. Serious students and practitioners of eminent domain or condemnation law now have the opportunity to compare the laws of different states in key areas and focus on particular issues of interest. Those unfamiliar with this area of the law may turn to a jurisdiction’s chapter for the answers to basic questions.

At the time of the book’s inception in 2004, no compendium existed of every jurisdiction’s condemnation laws. Created and edited by the past and present leadership of the ABA Section of Litigation’s Condemnation, Zoning, and Land Use Committee, the committee membership also served as focus group and muscle during the book’s development. Experienced practitioners from each particular jurisdiction reviewed and summarized the laws of every state.

The book’s uniform categories of comparison include who may take; what may be taken; what is the procedure to take; what is the procedure to challenge a taking; what is owed by a taking; who is owed for a taking; how are regulatory takings addressed; and, the most important question in any litigation, are attorney fees recoverable? The authors for individual states included additional subcategories if their jurisdiction addressed these broad categories in a different or unusual manner. For example, authors provided additional details about timelines, explained the slow or quick take procedures, and detailed pre-condemnation procedures and preliminary steps necessary before filing an action.

The U.S. Supreme Court issued its decision in Kelo v. City of New London, 545 U.S. 469 (2005), while this book project was under way. Kelo brought condemnation law into everyday conversation between lawyers and lay people for the first time in decades. The book’s coverage of the states’ reactions to Kelo is a valuable contribution. Unlike many writings in reaction to Kelo, the Fifty-State Survey only addressed actual legislative enactments and judicial decisions. Too many other publications cover in considerable detail bills filed in state legislatures that never became law. Approximately 30 chapters in this book show readers the enacted amendments instead of telling readers what changes could have occurred. Some chapters, including Arkansas, Hawaii, and South Dakota, specifically note where states had no changes in their eminent domain laws because of Kelo.

How to Make a Great Book Better

No book can answer every question or satisfy every reader. This valuable resource and worthwhile book deserves future editions with this first edition serving as a stable foundation. Some very interesting topics addressed in some states were overlooked by the rest of the jurisdictions. For example, some states, but not all, addressed interest on awards, admissibility of tax valuation as evidence of value, and compensability for diversion of traffic. The latitude provided to explain unique issues in each author’s jurisdiction conflicted, however, with the goal of uniformly addressing common issues across all 50 states and the District of Columbia. Future editions will ideally include subcategories added by some jurisdiction as issues each state will uniformly address.

Another concern regarding this book is that the authors of the Fifty-State Survey appear to be mostly lawyers representing landowners, whose property the government has taken. While some authors are academics and others had once represented taking authorities, the majority of authors are from only one side of these lawsuits.

The information certainly appears neutral and well-balanced, even if the representation of each side in the litigation appears less so. The editor’s goal was that “[e]ach chapter is a summary of what the law is, not what it should be,” and he appears to have succeeded. To take this resource one step further, each state’s author should adopt or cajole an attorney for a taking authority to serve as coauthor before this excellent book’s next edition. Very few words would probably change with more taking authority counsel as coauthors, but at least then lawyers from each corner of the ring would be shining light together into this “dark corner of the law.”

Joseph Callanan is an associate editor for Litigation News.