The recent “#MeToo” movement has captivated the attention of the public and the media, so much so that the hashtag has become ubiquitous. It has had an indelible impression on every employer and workplace, and the legal profession is no exception. In addition to its tangible impact in our profession—with a renewed interest in sexual harassment and discrimination actions, an increase in requests for guidance on handbooks and policies, and requests for training and legal opinions—there also have been intangible consequences of the movement.

#MeToo has started a valuable conversation about the presence of bias (both conscious and unconscious), discrimination, and harassment in the workplace, and its groundswell has created an opportunity for reflection and action for the legal profession. We are encouraged to examine our own perceptions and behaviors and our own workplaces and culture. #MeToo presents an opportunity to be proactive in addressing bias and discrimination in our workplace. We have #MeToo to thank for creating awareness of the need for change in the legal profession. But it is up to us to use our awareness to make positive strides in 2019 and beyond.

2018 Report: The State of the Profession

Last year, the ABA was involved in a blockbuster study that addressed discrimination, bias, and sexual harassment. The study was conducted on behalf of the ABA’s Commission on Women in the Profession and the Minority Corporate Counsel Association by the Center for WorkLife Law at the University of California, Hastings College of Law. The resulting report—released in September 2018 and aptly titled You Can’t Change What You Can’t See: Interrupting Racial and Gender Bias in the Legal Profession—details the sort of ingrained bias that diverse lawyers face, with women of color reporting the highest level of bias in the workplace.

The report also provides statistics regarding female lawyers and their experiences of sexual harassment at work. For example, one quarter of female lawyers reported that they had encountered some form of sexual advances or harassment at work. The report identifies patterns of systemic bias, including an expectation that women and people of color must work harder than their colleagues just to prove themselves as equal, and a Bias Interrupters Toolkit (beginning on page 14 of the report) offers suggestions to produce change in behaviors and outcomes in the workplace.

The report also identifies disparities among male and female lawyers as well as lawyers of color when it comes to expressing anger in the workplace. See You Can’t Change What You Can’t See 24–25. “The research suggests that women lawyers are more likely to be judged in a harsher light than men when they display assertiveness, self-promotion, or anger, according to [report coauthor] Joan Williams.” Debra Cassens Weiss, “Showing anger can backfire for female lawyers, studies say; law prof suggests ‘gender judo’ response,” ABA J., Aug. 6, 2018.

Male and female attorneys were asked in a survey if they felt free to express anger at work when it is justified and whether they felt penalized for assertive behavior. The attorneys’ responses revealed an overwhelming double standard that was exacerbated, in some instances, by race as well as gender. More than 56 percent of white men felt free to express anger, compared with about 44 percent of white women and lower numbers for men and women of color: 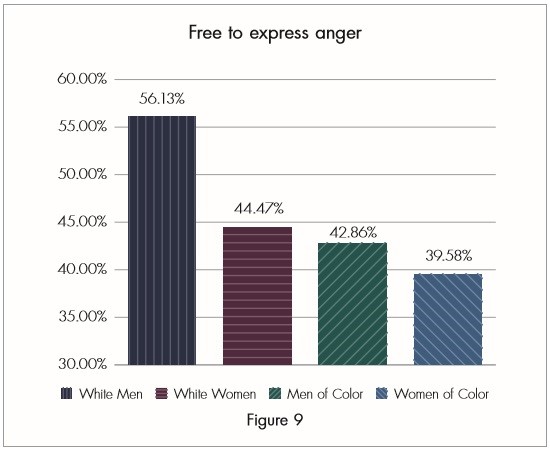 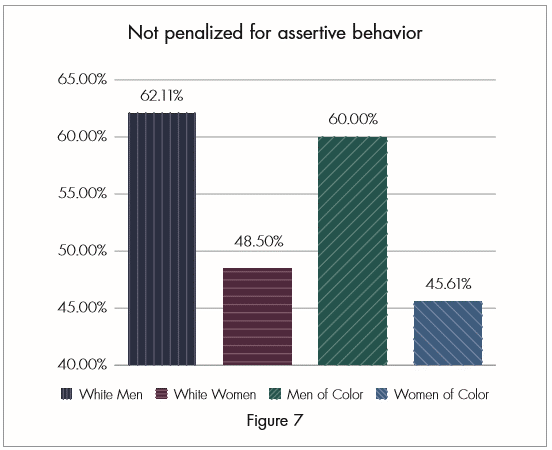 The survey demonstrated that showing anger can backfire for female lawyers, but not their male counterparts. The way the lawyers were perceived was influenced by their gender.

A separate study led by Arizona State University psychology professor Jessica Salerno reached similar conclusions regarding displays of anger in the courtroom. Salerno’s study, “Closing with emotion: The differential impact of male versus female attorneys expressing anger in court” (42 Law & Hum. Behav. 385–401, Aug. 2018), demonstrated that gender bias can have an impact on the way people perceive a lawyer’s competence. For example, female lawyers who showed anger during closing arguments in a jury trial reenactment were found by viewers to be “shrill, hysterical, grating and ineffective,” whereas their angry male counterparts were viewed as “commanding, powerful, competent and hirable” as reported in an article about the study, “Justice not blind to gender bias,” ASU Now, June 25, 2018. According to Salerno, “[a] good attorney is expected to show traditionally male characteristics in court—anger, aggression, power. But what’s happening is that men benefit from this, while we are penalizing women for showing these same characteristics[.]” Id.

Opportunities for Growth in 2019

The 2018 report You Can’t Change What You Can’t See highlights problems that need solving. After doing some of my own inventory and reflecting on more than 20 years of practice, I have prepared the following basic “toolkit” to address (and hopefully eradicate) discrimination, harassment, and bias in the workplace as well as in the legal profession. Be the change you want to see in 2019, and encourage your friends and colleagues to do the same.

1. Examine your own implicit bias, behavior, and reliance on stereotypes. No one wants to view themselves in this light, but as we say about potential jurors, no one comes into the room a blank slate. We all bring with us into the workplace our life experiences, values, and beliefs. That includes our own implicit bias. Implicit bias may not be readily apparent but is based on adherence to outmoded or pernicious stereotypes. This was perhaps the most difficult step for me, and it flew in the face of how I thought about myself as a feminist and as a proponent of equality and equity. I realized that I was influenced by stereotypes and some of my own biases more than I would like to admit.

However, as the title of the 2018 report says, “you can’t change what you can’t [or won’t] see.” The first step to avoid transmitting bias in hiring, assignments, performance evaluations, compensation, and promotions starts with yourself. Lawyers and law firm managers need to engage in unvarnished and frank self-study about how stereotypes or their own beliefs can influence their actions at work. For me, that meant writing my beliefs in a journal or doing a writing exercise, then having a frank discussion with a trusted advisor. When you see your values and preconceptions clearly, and you commit to being mindful about how you act—knowing that you may be influenced by bias or a stereotype—you take a step toward change. After a personal “inventory,” you can set about improving yourself and, thereafter, your workplace.

2. Prioritize diversity. Make diversity a value and something that is sought after in your workplace. That also means embracing a spectrum of sexual orientation and identity, race, ethnicity, and ability in your workplace. Make the creation of a diverse workplace a factor in each hiring and promotion decision that your organization makes. And let that be known; if it is a value, it is worth communicating—especially within your organization. Diverse leaders bring diverse viewpoints. Giving diverse lawyers the proverbial “seat at the table” matters, especially where work assignments, performance evaluations, compensation, and promotion to leadership positions are concerned. It isn’t that bias, discrimination, or harassment cannot happen at a diverse firm. But I believe, and my experience tells me, that as the balance of power equals out, the culture does, too; and for the better.

3. Exercise the power of the purse (or the briefcase). Nothing secures a place at the table (and power) like having business and client relationships. Promotions often are tied to one’s ability to attract and maintain business, particularly in the law firm environment. If you are in a position to steer business to a lawyer or a firm, prioritize retaining a minority- or a women-owned firm or a diverse lawyer or firm. There are plenty to choose from. But don’t stop there. Ensure that the firm and the lawyers working on your assignments include women and that there is no “window dressing.” Back up your values with action, and ensure you are working with qualified diverse lawyers and firms wherever and whenever possible (hint: it is always possible). As noted above, communicate within and outside your organization that this is a value. Again, if it is a value, it is worth communicating.

4. Be a mentor. Be a sponsor. Be an ally. Do you know these terms and the difference among them? Get to know them as part of your initial self-study. The distinctions are important (and you can be all three). For example, a mentor is a trusted person who advises and shepherds a mentee based on his or her experience or expertise, while a sponsor is someone who takes a more direct role in the success of a putative sponsee. I think of a sponsor as more of an advocate for opportunities for or the advancement of the sponsee. An ally, by contrast, need not have a guidance role or an advocacy role (though of course he or she can have such a role), but I use “ally” in the way that the lesbian, gay, transgender, bisexual, and queer (LGTBQ) community uses the term: An ally is someone who is supportive of LGTBQ people. It is important to be supportive, including of differences among your colleagues.

One example I can think of involved a colleague who discussed the way a female associate dressed (the office had a “business casual” dress code), and I was taken aback because his statement about her choice of casual seemed sexist and derogatory. To be supportive of her, I queried whether he had the same concerns about her male counterparts, who sometimes wore sneakers and hoodies to the office, and whether he thought her being “too casual” was based on the fact that he did not expect a woman to dress that way for the office. The prompt made him think about it. I didn’t need to call him a sexist or fight with him; the prompt was enough for him to realize what he was doing and redirect his thinking. It’s a small example, but within your organization there may be similar “teachable moments” to uncover (and eradicate) bias or the use of stereotypes.

5. Educate yourself. Educate your organization. Here is where bar associations can really boost professional development. There are numerous educational opportunities and opportunities to raise your own awareness through education offered through bar associations. Encourage colleagues and managers to get trained. Make use of educational materials like webinars to assist in the promulgation of policies that enhance diversity and target conscious and unconscious bias and discrimination. Most bar associations provide (and some states now require) continuing legal education credits regarding discrimination and the elimination of bias. The ABA is a valuable resource for educational materials. For example, the Commission on Women in the Profession has published Zero Tolerance: Best Practices for Combating Sex-Based Harassment in the Legal Profession (Aug. 31, 2018), and it is a mainstay on my office bookshelf. It provides guidance for assessing implicit bias and developing workplace policies, and it includes practical sample polices, including a policy prohibiting harassment.

#MeToo started a conversation, and the legal profession is a necessary part of that conversation: #UsToo.