Cannabis extractables include a range of products that are produced by treating the raw cannabis vegetable matter with a solvent to isolate (and concentrate) the chemical components of interest—not only delta-9-tetrahydrocannabinol (THC, the main psychoactive ingredient) but also a large number of other cannabis chemicals such as terpenes (associated with flavor) and cannabidiol (ingredient with several purported health benefits). The process has the benefit of allowing the use of cannabis plant components other than the buds, which have lower concentrations of these chemicals and would otherwise be considered of low value. Extractables are referred to by various names, such as wax, dabs, shatter, and budder, which identify the consistency rather than the chemical content of the product.

Studies have shown that consumers’ preference for cannabis extractables is driven by the desire for a stronger, longer-lasting high. Mallory Loflin & Mitch Earleywine, “A New Method of Cannabi Ingestion: The Dangers of Dabs?”, 39 Addictive Behav. (2014). Not surprisingly, extractables are a rapidly growing sector of the cannabis industry. For example, sales of cannabis concentrates intended for inhalation in Washington state grew 146 percent between 2014 and 2016, recently comprising 21percent of all cannabis sales. Rosanna Smart et al., “Variation in Cannabis Potency and Prices in a Newly Legal Market: Evidence from 30 Million Cannabis Sales in Washington State,” 112 Addiction (Dec. 2017).

Making Extractables
There are a number of different methods that are used to produce extractables.

A common method involves pouring butane (or, less commonly, propane) over a packed column of cannabis plant clippings to leach out the chemical constituents. The butane is then evaporated off to produce butane hash oil (BHO). This process, often termed blasting, has garnered a bad reputation due to fires produced in amateur operations as heat is applied to butane to separate it from the active ingredients. In fact, the process is illegal in many states, although some make exceptions for commercial operations where a closed-loop system minimizes the potential for solvent ignition (e.g., the State of Washington licenses certain closed-loop systems for production of extractables). Despite the legal restrictions, amateur production (open blasting) remains common due to the low cost and high sales potential of the resulting BHO. A quick internet search will reveal tens of thousands of videos offering advice on how to carry out these DIY extractions. 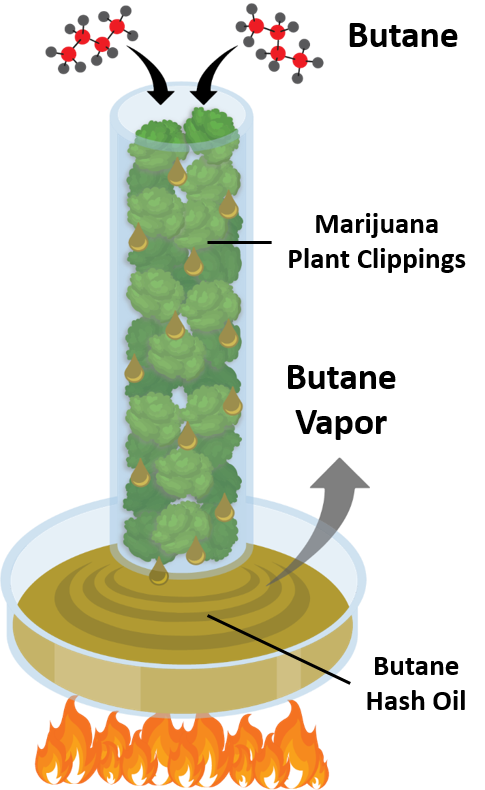 Other extraction techniques are possible, e.g., using liquified carbon dioxide or alcohols, but these are relatively uncommon due to cost and perceived product quality issues, respectively. Solvent-free methods are also available but are uncommonly used as they are time-consuming and result in variable quality.

Challenges in Assessing Quality
A key challenge is the lack of consensus on the appropriate analytical testing of cannabis products to ensure their safety. The various states that have legalized cannabis have conflicting laws in terms of what is allowed and what must be tested. Currently, there is a lack of guidance on analytical methods, detection limits, and even the set of chemicals of interest. In 2016, the State of Oregon conducted a case study setting priorities for pesticide testing, using factors such as pesticide toxicity, availability for use, and frequency of prior detections to score pesticides for testing requirements. However, the state was unable to determine what levels would be acceptable based on actual product use. Instead, it defaulted to presence/absence, i.e., limits of quantification that laboratories should reasonably be able to achieve.

Residual Solvents
While much consumer attention has focused on the potential safety of residual solvent contamination, this is not, toxicologically speaking, a particular concern because chemicals such as butane have relatively low toxicity (i.e., it is not carcinogenic or developmentally toxic). However, in amateur operations, the quality of solvent may not be ideal (e.g., lighter fluid, which can contain low levels of other chemicals). Given the largely unregulated nature of the cannabis market, the risks of adulterated products made with poor-quality solvents is a credible concern.

Increased Potency
The THC concentration in extracts is four to 10 times higher than in smoked cannabis. While the lower level of cannabinoids in smoked cannabis does appear to pose only limited health risks, the risks of the much greater dose obtained with extractables are much less understood. Of particular interest to the legal profession, studies have reported no significant differences in terms of risk-taking behavior, impaired control, or blackout frequency. The same studies, though, have reported that the use of extracts (BHO specifically) produces increased physiological dependence and withdrawal symptoms versus smoked cannabis. Loflin & Earleywine, supra. More concerning, multiple case reports of psychosis-like symptoms have been reported in individuals soon after they started using extractables like BHO. There has been some speculation that certain individuals are predisposed to such effects due to their metabolic capacity or neurochemistry. Data also shows developmental effects in children of women who have high cannabis consumption during pregnancy.

However, the available health effects studies are limited in number, and many have design limitations. The limitations stem from the difficulty in studying a drug that is illegal on the federal level, which results in limited funding and, consequently, less comprehensive study designs.

Pesticides
Considerable attention has been focused on the potential for pesticides to be concentrated in cannabis extracts, given that such chemicals would also be extracted by solvents during processing. For most crops, the U.S. Environmental Protection Agency (EPA) tightly regulates the use of pesticides, specifying the crops on which they can be used, the pests that can be controlled, the timing of application, and allowable concentrations in crops at the time of harvest. No equivalent regulatory structure exists for cannabis. Lacking such controls, cannabis growers use a wide range of pesticides, and that use is not typically disclosed on product information.

Studies have shown that pesticides are concentrated in extracts up to 10 times more than in raw cannabis. Furthermore, research published by the Cannabis Safety Institute showed a large number of pesticides detected in cannabis extracts, several of which are not allowed under state regulatory programs and several of which were above concentrations allowed in food crops by the EPA. Rodger Voelker & Mowgli Holmes, Pesticide Use on Cannabis 10–11 (June 2015). Similarly, the presence of pesticides in extractables raises concerns regarding California’s Proposition 65 (Prop 65), which lists many of the pesticides that have been detected in cannabis extractables. While cannabis smoke is listed under Prop 65, extractable cannabis is not; however, Prop 65 suits based on pesticide concentrations in extractables seem likely. 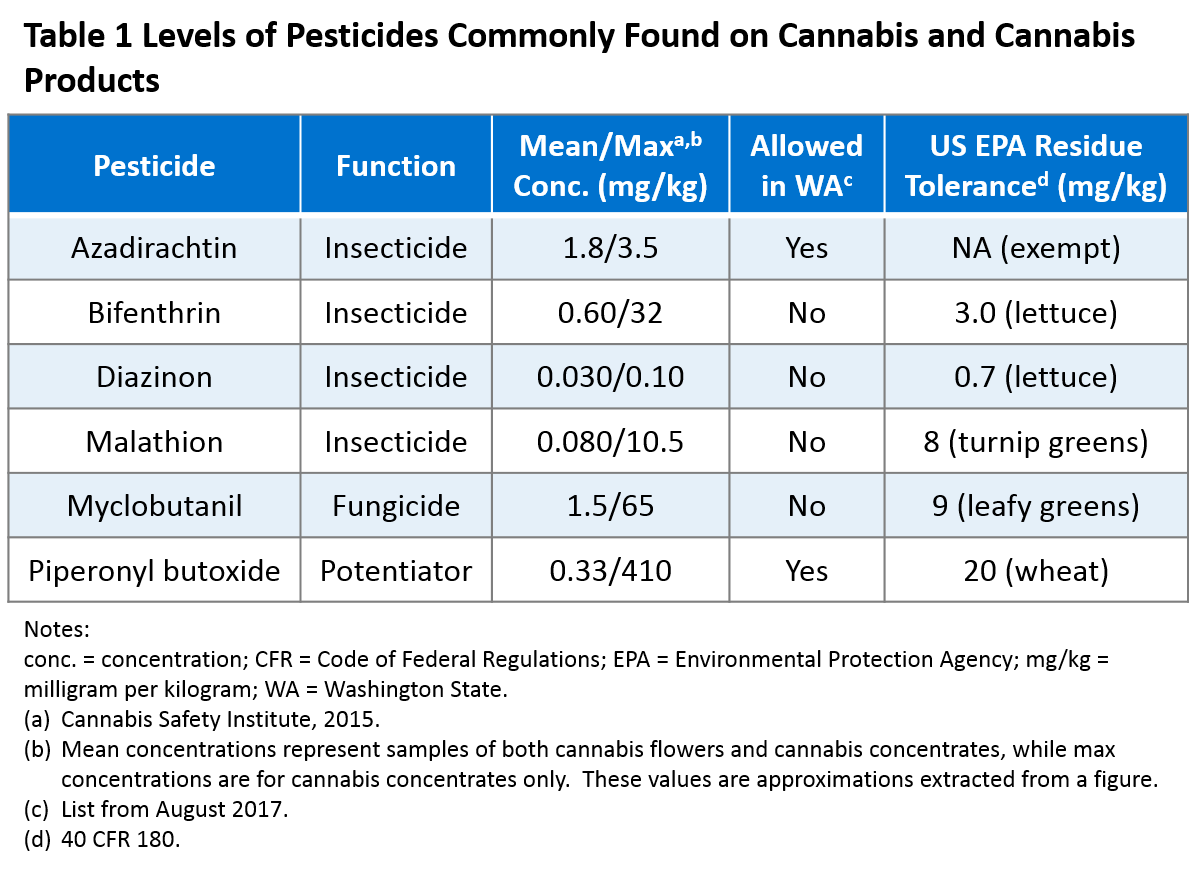 Moreover, users tend to add flavorings and fragrances to their vape mixtures. This may be done not only to provide a more enjoyable experience but also to mask the very noticeable smell of cannabis when vaping in public. Unfortunately, as with nicotine vaping, the added ingredients may pose a significant risk.

Vaping flavorings are not subject to specific regulation (beyond that applied to all consumer products), and there is substantial mom-and-pop production of custom vaping flavors. Many of the products are marketed as Generally Recognized as Safe (GRAS) by FDA, a misleading term for consumers. The U.S. Food and Drug Administration’s GRAS designation is based on oral exposure and customary-use levels in food, which may have little bearing on vaping fluids. Some vaping flavorings may, in fact, be less benign than they seem. For example, researchers have measured the presence of two chemicals—2,3-butanedione and 2,3-pentanedione—in vaping fluids; these butter-flavoring chemicals are notorious for their association with “popcorn workers lung,” the subject of a number of litigation cases of both workers and consumers claiming significant lung damage due to exposure to these chemicals. In some vaping fluids, the researchers found levels of the two chemicals that exceeded occupational exposure limits for these chemicals, in some cases by more than fivefold.

Conclusion
As with many products, the ingenuity of humans in devising new ways to expose themselves to chemicals typically far exceeds our understanding of the potential health risks of those exposures. The use of extractables will continue to grow, with vaping products comprising a notable portion of that growth. There is a need to establish more rigorous testing standards (via either regulatory or voluntary action) to control the levels of pesticides in cannabis extracts. In addition, as always, more research is needed to understand the potential health effects of the increased THC exposures and potential contaminants in extractables, something that will be challenging given the current federal legal regime.