Characterizing potential skin hazards is part of the larger issue of biocompatibility, which refers to the capacity for a product to be used safely in its intended application by consumers, without eliciting any unwanted biological or toxicological responses. For consumer products expected to contact the skin, assessment of chemicals that might be mobilized by contact with sweat is an important component of a product stewardship strategy. Chemical hazard and risk assessment for such products must therefore include evaluation of both skin irritation and skin sensitization, two distinct toxicological endpoints.

Skin Irritation
The universe of skin irritants covers a wide range of chemicals with different mechanisms by which they damage the skin. Some chemicals induce direct destruction of skin tissues (e.g., acids and bases). Solvents typically induce damage by defatting, or dissolving lipids naturally present in the dermal tissue. Other chemicals, such as cationic or anionic surfactants, can trigger the release of inflammatory chemicals in the skin.

The severity of a skin irritation response is characterized by skin redness (erythema) and skin swelling (edema). Unless they result in significant damage, irritation symptoms resolve quickly once exposure ceases. Such effects are considered reversible. Irreversible skin damage, often characterized by visible killing (necrosis) and damage to the top layers of skin tissue, can result from high-level or prolonged exposure and can lead to the formation of scar tissue. The susceptibility of skin to irritant responses typically is independent of prior chemical exposures (there is no lasting susceptibility). An exception occurs with damaged skin (sun burn, chemical burns, open wounds, or scabs), which may lead to increased dermal penetration and increased severity of irritation effects. The lack of continued susceptibility is a unique quality that distinguishes skin irritation from skin sensitization. 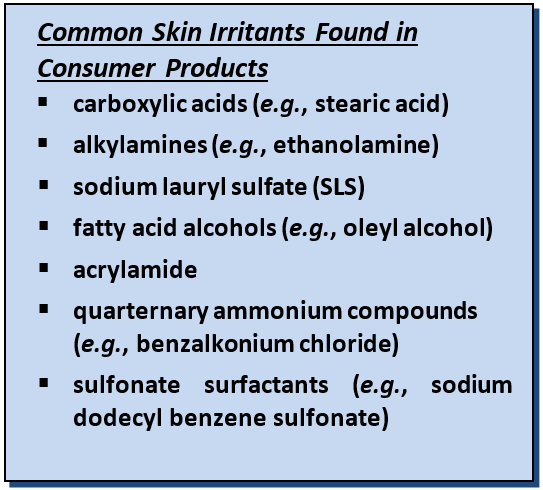 (e.g., toothpastes). Toxicological testing indicates SLS is irritating to the skin of rats, rabbits, and mice at concentrations of 1 percent and above after multiple applications. It is also often used as a positive control in irritant studies in lab animals at higher concentrations (e.g., 20 percent). Due to its well-characterized irritation hazard, SLS is not allowed in personal care products at concentrations above 1 percent.

Testing for irritation potential (as typically described on a safety data sheet) is normally conducted with pure or high-concentration substances (e.g., 10 or 50 percent). Most labeled skin irritants are irritating only in the percent to tens of percent range, and exhibit fairly clear dose-response patterns. Thus, a chemical described as an irritant on a safety data sheet (based on testing at 100 percent concentration) may not be irritating if used at 0.1 percent in a personal care product or cosmetic. This is a common way that data on safety data sheets are misinterpreted.

Skin Sensitization
Skin sensitization is receiving increasing attention from regulators, and several chemical sensitizers are designated substances of very high concern (SVHC) by the European Chemicals Agency. Once an individual has been sensitized to a particular chemical, increased sensitivity to it may last for years or even decades. A. Gente Lidholm et al., "Unexpected Loss of Contact Allergy to Aluminium Induced by Vaccine," 68 Contact Dermatitis,No. 5, 286–92 (2013). Sensitized individuals are more likely to react to lower exposures to that chemical than a non-sensitized individual.

A major distinction from skin irritation is that dermal sensitization requires immune system involvement (it is a hypersensitivity response). Generally, the immune system is responsible for detecting foreign agents in the body and destroying them, though it can sometimes react in unintended ways. Sensitization consists of two distinct physiological responses: induction and elicitation. Induction occurs when a chemical penetrates the top layers of the skin, encountering various skin proteins and enzymes along the way. Chemical-protein complexes known as "haptens" or "antigens" may interact with immune cells in the skin, which then carry the hapten to the nearest lymph node. There the activated immune cells trigger a proliferation of T cells designed to specifically react to the chemical-protein complex upon reexposure. In other words, the induction phase primes the immune system to react to future exposures to that chemical allergen. The elicitation phase occurs when an induced or sensitized individual is exposed to the same chemical again. Upon reexposure, the immune system is already primed to react, resulting in an inflammatory response including skin redness, swelling, and blistering. These reactions may occur rapidly, often with 24 hours of reexposure, and typically reach a maximum severity between 48 and 72 hours. The individual will continue to react to the chemical whenever he or she reexposed. Therefore, skin sensitization induction is considered a chronic health effect. This persistent susceptibility is one reason sensitization is a concern to regulators.

Exposure levels for induction phases as compared with elicitation phases can be highly variable and chemical specific. For example, the induction dose for methylisothiazolone (a common antimicrobial and well-characterized sensitizer) is typically twice the dose necessary for the elicitation phase. In contrast, the induction dose for nickel chloride (commonly associated with sweat contact with jewelry) is about 7,500 times greater than the dose necessary for the elicitation phase. P. Griem et al., "Proposal for a Risk Assessment Methodology for Skin Sensitization Based on Sensitization Potency Data," 38 Reg. Toxicology & Pharmacology, No. 3, 269–90 (2003). Because of the significant variability between induction and elicitation thresholds, regulators and researchers mainly focus on defining induction threshold doses.

Quantitative Risk Assessment for Skin Sensitization
The challenge of identifying a protective exposure level is a common concern in the field of risk assessment generally. In 2008, the Research Institute for Fragrance Materials (RIFM) 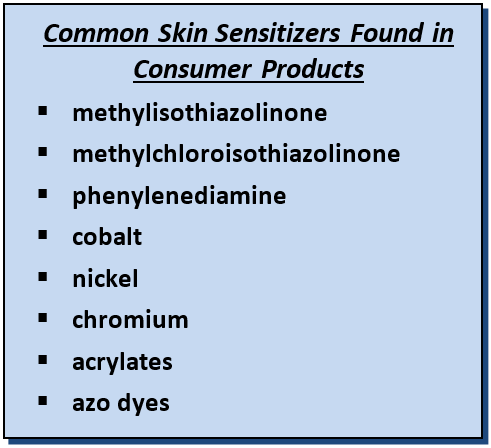 published a method for dermal sensitization quantitative risk assessment. The RIFM's quantitative risk assessment approach was subsequently adopted by the Cosmetic Ingredient Review and reviewed and recommended by the World Health Organization. The quantitative risk assessment method first identifies a no expected sensitization induction level (NESIL). NESIL values are typically based on review of available human patch testing data or from sensitization studies in mice (e.g., the local lymph node assay). Recent advancements in non-animal testing methods such as cellular (in vitro) or quantitative structure activity relationship (in silico) approaches may also inform a weight-of-evidence chemical hazard and risk assessment for sensitization. Assessment factors, or safety factors, are applied to the NESIL to account for underlying uncertainties (e.g., intraindividual variability), to arrive at an acceptable exposure level (AEL). For instances where robust human or animal toxicity data are unavailable, other more interpretive approaches may be required to determine a chemical-specific AEL. T.A. Lewandowski & J.M. Cohen,  Letter to the Editor, "Skin Sensitization Risk Assessment: Considering Available Data for Weight of Evidence Assessments," 82 Reg. Toxicology & Pharmacology (Dec. 2016). The AEL is then divided by the expected consumer exposure level (CEL), to determine the margin of safety. Expected consumer exposures for a specific exposure scenario are considered acceptable when the margin of safety is greater than or equal to 1 (AEL ≥ CEL).

Similar to the universe of skin irritants, the universe of skin sensitizers covers a wide variety of chemicals commonly found in everyday products and materials. Consumer products that may contain well-known skin sensitizers include cosmetics, personal care products, nail products, inks, perfumes, leather products (due to tanning agents and biocides), jewelry, textiles (dyes), and adhesives. Applying the RIFM quantitative risk assessment method can allow for identification of acceptable exposure levels below which risk of skin sensitization in consumers is expected to be negligible.

Conclusion
Skin effects, in particular skin sensitization, appear to be of growing interest to regulators and consumer groups. Legal professionals are likely to increasingly encounter such cases and so need to become familiar with the basic concepts and tools available for evaluating hazard and risk.