The Geospatial-Intelligence Revolution is Underway and You Should Care!

Tom Monheim, General Counsel of the National Geospatial-Intelligence Agency spoke to the committee about imagery, satellites, and geoint in the future of national security

Andrea Gacki, Director of the Office of Foreign Asset Control at the U.S. Department of the Treasury spoke to the committee about economic sanctions

The American Way: Rule of Law in Intelligence and Covert Operations

Democracy and Justice in the Age of Disinformation

The Standing Committee and the Center on Strategic and International Studies held a Defending Democratic Institutions event "Democracy and Justice in the Age of Disinformation" on Law Day 2019. Suzanne Spaulding, Harvey Rishikof, and Elizabeth Rindskopf Parker, Committee members and former chairs addressed the audience on Russian foreign influence campaigns and the new report "Beyond the Ballot: How the Kremlin Works to Undermine the U.S. Justice System."

Watch the Video | Read the Report

View the Flyer | Listen to the Audio | ABA News Article

View the Flyer | Listen to the Audio | ABA News Article

John Carlin of Morrison & Foerster, former Assistant Attorney General of the National Security Division of the Department of Justice discussed his new book Dawn of the Code War, the time he spent fighting foreign cyber attacks in government, and what the future of digital warfare looks like.

Joyce Corell: The Internet of Things and Supply Chain: The Next Generation of Vulnerabilities in National Security

"The Use of Force in North Korea: The Legal Process"

General Counsel Spencer Fisher of the National Counterintelligence and Security Center delivered remarks after Director William Evanina was called away.

View the Flyer | Listen to the remarks

Chief Judge D. Brooks Smith of the 3rd Circuit Court of Appeals and Professor Ronald Collins of the University of Washington Law School discussed a new book on the role of judges over a brown-bag lunch event.

View the Flyer | Purchase the Book

Frances Townsend, former Presidential advisor for Homeland Security and Counterterrorism, spoke about FISA 702 and her experiences in government.

Joel Brenner served as Senior Counsel and Inspector General in the National Security Agency. He is currently a Senior Fellow at MIT.

Dana Boente is the Acting Assistant Attorney General of the National Security Division of the U.S. Department of Justice and the U.S. Attorney for the Eastern District of Virginia.

Adam Smith is an expert on US trade sanctions and international investment regulations. He is a partner at Gibson, Dunn & Crutcher who previously served in the US Treasury Department's Office of Foreign Assets Control.

Melissa Hathaway: Cybersecurity - The Intersection of Law, Policy and Technology

A breakfast event featuring Melissa Hathaway, the president of Hathaway Global Strategies, and a cybersecurity expert who served in two presidential administrations.

A breakfast by the ABA Standing Committee featuring Edward You of the FBI's Weapons of Mass Destruction Directorate.

Find more information about Special Agent You and his talk here.

Dr. Matheny is the director of IARPA (Intelligence Advanced Research Project Activity) which funds high risk/high reward research to advance US Intelligence interests. He spoke on the intersection between technical research and legal policy in the security world.

Adam Segal is an expert in cybersecurity and China policy with the Council on Foreign Relations, he joined the ABA for a talk and a Q&A session.

Ambassador Crocker is a veteran of the foreign service department and has served as American ambassador to six countries across the Middle East. 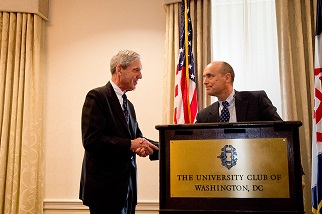 The Standing Committee presented the 2015 Morris I. Leibman Award in Law and National Security to Robert Mueller, Director, Federal Bureau of Investigation (2001-2013).

Laura Donohue, Professor of Law, Georgetown University Law Center, joined the Standing Committee to discuss her new book The Future of Foreign Intelligence: Privacy and Surveillance in a Digital Age.

Listen | In The News

Robert Litt: The Fourth Amendment in the Digital Age

Robert Litt, General Counsel, Office of the Director of National Intelligence, joined the Standing Committee in a conversation about the Fourth Amendment in the digital age.

Listen | In The News

Dean Banks analyzed the military's domestic role as it is shaped by law, and discussed what we must learn and do before the next crisis.

View the breakfast and lunch programs held from 2014-2015

View the breakfast and lunch programs held from 2005-2007