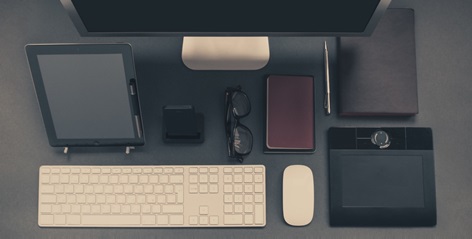 Whether you are starting out, transitioning to a solo or small firm practice or just in need of an upgrade for aging technology, choosing the right desktop computer for your needs can take time and energy that you could be pouring into your practice. Rather than leave you to your own devices, here are some tips that may narrow your search. Please note that we have intentionally not addressed the operating system or computer manufacturer in this article. We assume you will most likely use a current iteration of Windows or a current iteration of Apple’s Mac OS X as your operating system and hardware that will run that OS. The advice below can apply to both Mac and Windows-based computers. In the “for whatever it is worth” department, one of the authors is primarily a Mac person and the other primarily a Windows person.

Tip One: In This Current Mobile-Mania World, There Are Still Many Reasons to Consider Buying a Desktop. Some of you may be wondering whether a desktop is a wise investment. After all, isn’t faster, smaller, lighter the way of the world these days? Not necessarily. If you are choosing between a desktop system and a mobile laptop system, you should go with the mobile laptop system. If there is room in your budget for both, however, then you should get both. Generally, the desktop models will provide you with more power and flexibility in terms of setup, while the laptop gives you both mobility and a backup should your desktop computer fail. Depending on your level of experience, you may find the desktop to be a more familiar platform, making it easier to set up and use. Another reason to consider a desktop computer is the ease of upgradeability compared to laptops. It is not impossible to upgrade a laptop, but desktops are much easier. Security is also a consideration, it is harder to steal or lose a desktop than a laptop. The easier it is for you to carry your laptop, the easier it is for someone else to carry it away. (NOTE: In case that does happen, check out our December 2015 TAPAs feature on Office back-ups.)

Tip Two: Determine Your Budget Ahead of Time. For most business setups, especially if you are just starting out, you should be able to buy a steady workhorse system for under $1,000. Depending on what you have, you may only need to upgrade the tower (the computer itself) as your monitor, keyboard, mouse, speakers, and so on should all work with the new system. On the other hand, if you have an all-in-one device (such as an iMac), you need to replace the whole package, as they are fully integrated.

Tip Three: Buy the Best Desktop You Can Afford, But Don’t Waste Money on Features You Don’t Need. Technology is in a constant state of flux. Anything you buy today will be outdated and old news by the same time next year. You should aim to buy the fastest central processing unit (“processor”) and the largest RAM and hard drive (or RAM disk) that can fit comfortably in your budget. Maximizing these three aspects will give you the longest window of usability before the system feels like it is obsolete.

Tip Four: Watch for the Warning Signs That It May Be Time to Replace Your Computer. Desktop hardware is actually pretty reliable. Catastrophic hardware failures are generally pretty rare, with the exception of hard drives. There are few moving parts inside today’s desktop computer. You have the hard drive, the DVD or CD drive(s) (although these are appearing less and less), and a couple of fans. Everything else is an immobile electronic. Unless you have a lightning strike or let your desktop overheat, electronic components should last a long time (10 years or more.) As a result, not all computers need to be replaced at the first signs of trouble. For example, your aging computer may ask you to boot it in safe mode, or may “hang up” before fully booting up, or maybe it corrupts your documents, preventing you from opening or editing them. All of these could be signs of trouble, but they could also indicate the need for a little routine maintenance. A system restore, disk check, or virus scan can correct many of these common annoyances. Some of these fixes may not be simple though, and this can lead to a good reason to give up on your old desktop and move on. That said, we think that as a general rule you should plan on replacing computers no less often than every five years.

Reasons to Upgrade to a New Desktop

Sometimes, you just want something new. Upgrading to something faster can save you time, an important consideration when client matters are piling up.

Tip Five: To Conserve Your Desktop Surface Real Estate, Check Out All-in-One Desktops. An all-in-one system (often referred to as “AIO”) integrates the computer case and system components into the monitor, so that the entire desktop is contained all in one unit. Both Mac and PC desktops have all-in-one models available. AIOs are easier to move around then desktops, though not as mobile as their laptop cousins.

Hopefully these tips will help you in choosing a desktop. The configurations and advice apply equally to Mac or PC computers, so don’t worry if you already have a preference for one over the other. If you are still trying to decide between the two, you really can’t go wrong with either system.

Jeffrey Allen is the principal in the Graves & Allen law firm in Oakland, California, where he has practiced since 1973. He is active in the ABA (particularly in the GPSolo and Senior Lawyers Divisions), the California State Bar Association and the Alameda County Bar Association. A frequent speaker on technology topics, he is editor-in-chief of GPSolo Magazine and GPSolo Technology eReport. He serves as an editor and the technology columnist for Experience Magazine and has served on the Board of Editors of the ABA Journal. He also serves on the ABA’s Standing Committee on Information Technology. Recently, he coauthored (with Ashley Hallene) Technology Solutions for Today's Lawyer and iPad for Lawyers: The Tools You Need at Your Fingertips. In addition to being licensed as an attorney in California, he has been admitted as a Solicitor of the Supreme Court of England and Wales. He teaches at California State University of the East Bay. He may be reached at jallenlawtek@aol.com. You may also get technology information from his blog: jallenlawtekblog.com. Ashley Hallene is a petroleum landman at Alta Mesa Holdings, LP, and practices Oil and Gas law, Title Examination, Due Diligence, Acquisitions and Oil and Gas Leasing in Houston, Texas. She maintains a diverse solo practice on the side. Ashley is the coauthor of the technology overview Making Technology Work for You (A Guide for Solo and Small Firm Attorneys) along with attorney Jeffrey Allen. She has published articles on legal technology in GPSolo Magazine, GPSolo eReport, and the TechnoLawyer Newsletter. Ashley is an active member of the American Bar Association’s General Practice Solo & Small Firm Division, ABA’s Young Lawyers Division, the Texas Young Lawyers Association, the Houston Young Lawyers Association, and the Houston Association of Petroleum Landmen. She frequently speaks in technology CLEs and is Deputy Editor-in-Chief of the Technology and Reviews Department of the GPSolo eReport.

To Prevent Adverse Tax Consequences, Make No Bones About the Classification of Your Loans