It’s happened to just about everyone: the end of your iOS device charging cable becomes frayed and unusable. It can be a frustrating experience and oftentimes seems like something that shouldn’t have happened in the first place.

One would think that Apple’s brilliant designers could come up with a charging cord that lasts as long as the iOS device it came with. Until that day comes, Apple fans either have to grin and bear the inconvenience of charging cords with short life spans or seek out tools that help protect and extend the usability of the cords.

Fortunately, quite a few products out there are designed to do just that, and the Tudia Klip cable protector (online: http://www.tudiaproducts.com/klip/) is one of them. This protector can be used with any iOS charging cord, including those used with all generations of iPhones, iPads, and Apple Watches.

I was lucky enough to receive two complimentary Tudia Klips for this review, both of which I immediately put to use. It was a cinch to attach the device to the charging cord, and I encountered no issues in that regard. Once installed, the device secured the end of the charger cord providing protection by preventing unnecessary movement or crimping of the cord. 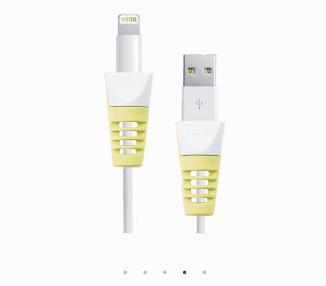 According to the website, the Tudia Klips are intended to be preventative and should be used when you first start using your charging cord, before any damage occurs. For that intended use, it seems they will more than achieve the goal of protecting the end of the charging cord and preventing any crimping or breaking of the cord and the wires housed within it.

That being said, that’s not what the Tudia Klip was designed to do, so that’s not necessarily a legitimate criticism. And, the fact that it provides sufficient protection to a cord that is already fraying is an added bonus and only adds to the value of this charging cord protector.

Another benefit is that the Tudia Klip provides sleek and unobtrusive protection and comes in a variety of attractive colors:

And, the good news is that the price is right. At just $7 per device, buying a few definitely won’t break the bank. So if you’re one of those people who finds that their charging cords often become frayed and broken after typical day-to-day use, buying a Tudia Klip as a protective measure would be a wise investment and will undoubtedly save you a lot of money down the road.

Nicole Black is a Rochester, New York, attorney and the Legal Technology Evangelist at MyCase, web-based law practice management software. She has been blogging since 2005, has written a weekly column for the Daily Record since 2007, is the author of Cloud Computing for Lawyers, coauthor of Social Media for Lawyers: The Next Frontier, and coauthor of  Criminal Law in New York. She is easily distracted by the potential of bright and shiny tech gadgets, along with good food and wine. You can follow her on Twitter at @nikiblack, and she can be reached at niki.black@mycase.com.