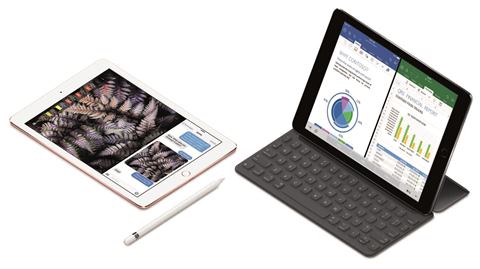 A while back I wrote about the iPad Pro, acknowledging its strengths, but giving it a somewhat mixed review. I am going to do another analysis of the iPad Pro, but this time, my conclusions will prove much more positive. The difference: Apple got it right this time. The second iteration of the iPad Pro kept the faster and more powerful chipset, returned to the 9.7” format of the original iPad (making it lighter and more easily handled and used in a variety of work-related situations), and offered the option of twice as much memory as any previous iPad, a cool 256GB. (Note that Apple also has increased the available memory on the 12.9” iPad Pro so that the specs on the inside of the two versions remain in synch.)

You can get the full breakdown of all the specifications of each version of the two iterations of the iPad Pro on the Apple website at http://www.apple.com/ipad-pro/specs/. I will give you the highlights here.

You can get either a WiFi only or a WiFi + cellular model of either sized iPad Pro with 32GB, 128GB, or 256GB (one exception, they do not offer a 32GB version of the 12.4” WiFi + cellular. A word to the wise, don’t even think about getting the 32GB version. Look at the 128GB version as the minimum and think seriously about getting the 256GB version to maximize the flexibility and utility of your iPad. Remember that you cannot add to the memory after you get it, so what you buy is what you get, until you spring for a new iPad. Both versions use Apple’s newest and greatest A9X chip with 64-bit architecture and an M9 coprocessor.

The WiFi + cellular version of the 9.7” Pro weighs in at 0.98 pounds (1.59 pounds for the 12.9” version). Note that the weight does not include any case or cover or the keyboard cover that you should get with the Pro. The 9.7” version measures 9.4” x 6.6” x .24”. The 12.9” Pro measures 12” x 8.68’ x .27’. Note that the measurements and weight of the smaller Pro match identically to the measurements and weight of the iPad Air 2 (which remains in Apple’s iPad lineup as a current model). You can see a quick but detailed comparison of the features of all current iPad models on Apple’s website at http://www.apple.com/ipad/compare/.

Notably, the 9.7” Pro has some extra features and a better camera than the 12.4” version. Possibly because the 12.9” version came to market quite a bit earlier than the 9.7” and possibly because Apple recognized that the size of the 12.9” Pro makes it much more difficult to use for photography. The 9.7” Pro has a 12-megapixel f2.2 iSight camera, while the 12.4” version has an 8-megapixel f/2.4 iSight camera. Other features on the smaller version only include autofocus with focus pixels (the larger version uses a different autofocus), True Tone flash, a sapphire crystal lens cover, improved noise reduction, and improved local tone mapping. On the video side, the smaller version will record in 4k video (the larger version does 1080p HD at 30 fps). Also, the FaceTime camera takes 5-megapixel photos on the smaller Pro and 1.2-megapixel photos on the larger one.

The smaller Pro comes with a 27.5-watt-hour rechargeable lithium-polymer battery. The larger Pro has a 38.5-watt-hour battery. The larger display requires the larger battery to provide the same working life per charge as the smaller battery provides in the 9.7” Pro (up to 10 hours of web-surfing on WiFi, watching video, or playing music). Notably the chargers for the two devices have different outputs, the smaller Pro comes with a 10-watt charger and the larger Pro comes with a 12-watt charger. If you get a second charger for the smaller Pro, buy the 12-watt version, it works just fine and charges faster. I recently read a posting online by someone who says that they used the 29-watt Apple USB-C charger (designed for the MacBook) and the recently released Lightning Adapter to charge an iPad Pro, and it charged it far faster than even the 12-watt charger. You can read about those experiments at http://www.cultofmac.com/420600/think-outside-the-box-for-super-fast-ipad-pro-charging/. I have not tested the device myself, but will likely give it a shot. If it really works, it makes my life easier.

You can get either size in silver, gold, or space gray. You can also get the smaller Pro in rose gold. Apple has not said anything about making the 12.9” Pro available in rose gold.

By the way, the more I use the optional Apple Pencil stylus, the better I like it. It works exceptionally well, adds considerable flexibility, and keeps fingerprints off the display. I encourage you to invest in one if you get a Pro. The cover with the integrated keyboard takes some getting used to as well. In terms of its tactile feel it is a step up from the virtual keyboard you can get on the display, but it is not my favorite keyboard to use. I have used it for a while now and have learned to deal with it. Because of the way it interfaces with the Pro and is powered through the Pro it makes sense to get it and learn to use it. It also offers a lighter and more mobile keyboard connection for the iPad than any of the third-party solutions I have seen.

I ordered mine as soon as I saw the specifications. I got a 256GB WiFi + cellular version in gold, with the keyboard cover and Apple Pencil. It instantly became my favorite iPad. That decision resulted from the combination of its power and speed, its capabilities, its portability, and the increased memory. Although I went through a period when I favored the Mini and it came with me almost everywhere, the increase in the size of my iPhone (I use the 6s Plus) made it almost as easy to see as the Mini and I stopped carrying the Mini, moving back to the iPad Air. Now the 9.7” Pro comes with me almost everywhere, and I use it more and more when I travel, using my MacBook Air less and less.

In truth, I still prefer to use the computer for writing, largely because I do not like to have to take my hands off the keyboard when I am writing. The MacBook has a trackpad that allows me to keep my hands on the keyboard and move the cursor and/or make selections with my thumbs or a finger, using the touchpad. Because the iPad does not have a touchpad available (Apple did not build one into the keyboard cover) and depends on a touch screen, you have to take your hands off the keyboard to touch the display to make those choices. I suppose that with practice I could learn to accommodate to that, but for now at least, I consider it an inconvenience at best and a significant annoyance.

For all other uses, the iPad does the trick, and I don’t need to pull out the computer (which has a far shorter useful life per charge) as often (particularly nice during a long flight). In fact, these days, I often travel with just my iPad Pro, my Kindle, and my iPhone. These devices have often proven all the technology I need for most trips.

Another significant advantage of the smaller version of the Pro relates to its usability in court. Because the larger Pro is sufficiently cumbersome to handle, I do not like the idea of using it in my hands in front of a jury. It is large enough that my inclination is to not hold it in my hands while addressing the jury in opening statements or closing arguments. I have liked the iPad for that purpose for some time because it allows me to talk to the jury without fumbling through pages in a notebook or a notepad or relying on notes in a computer that I need to set on a table or lectern to use while I talk. I can easily hold the 9.7” iPad in one hand and use the other for moving around in it as I need to do. The Mini also works very well for that purpose, but I prefer the 9.7” size as it lets me see a larger image.

Jeffrey Allen is the principal in the Graves & Allen law firm in Oakland, California. A frequent speaker on technology topics, he is editor-in-chief of GPSolo magazine and GPSolo Technology eReport. Recently, he coauthored (with Ashley Hallene) Technology Solutions for Today's Lawyer and iPad for Lawyers: The Tools You Need at Your Fingertips. In addition to being licensed as an attorney in California, he has been admitted as a Solicitor of the Supreme Court of England and Wales. He holds faculty positions at California State University of the East Bay and the University of Phoenix. He may be reached at jallenlawtek@aol.com. You may also get updated technology information from his blog: jallenlawtekblog.com.