In November, Apple released its fourth generation of the Apple TV. This version of Apple TV offers a thoroughly redesigned interface, along with the ability to download and use third-party apps—right on your television. While not earth shattering, the redesign makes Apple TV much more user-friendly and is a big step toward the next stage of a more interactive and personal television experience.

The new Apple TV is not terribly expensive, all things considered. The 32GB version costs $149.00 and the 64GB costs $199. The new motion sensitive remote, which is included in the price, is a big part of what makes the new Apple TV so much better than the prior version. 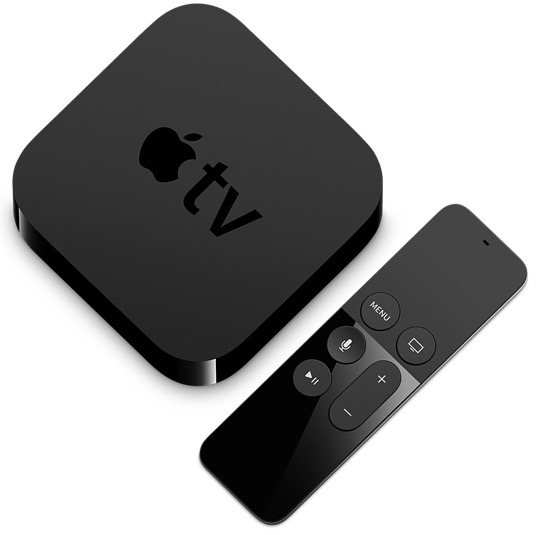 The top portion of the remote is a touch interface, making it easier to navigate the options available to you onscreen. Instead of clicking from one selection to the next, you can scroll through them and then press down to click on the one you’d like to select. While it may seem like a minor improvement, anyone familiar with the prior version knows what a difference this interface change makes.

Another brand new option that greatly improves the interface is the newly added Siri capability. Simply press down the microphone button to activate it and then tell Siri what you’d like to do. For example, you can launch an app, ask for movie recommendations, or tell Siri to play a song or album. Siri’s response can sometimes be hit or miss at this stage, but will no doubt improve over time.

Apps are another great feature that was rolled out with the fourth generation of Apple TV. The addition of third-party apps to the Apple TV ecosystem completely changes the ballgame. Now you can download apps, ranging from games and travel apps to weather apps. There are already thousands of apps available, with more to come. Certainly legal-specific apps will be on the horizon.

The motion sensitive remote comes in handy with many of the apps, including some games and exercise apps, making it responsive to your movements, much like a Wii remote. The motion sensitivity adds another valuable layer of interaction to the new Apple TV and exponentially increases developers' options when it comes to the creation of new apps. The possibilities are endless and most certainly will be worth waiting for.

Many lawyers will appreciate the smart home/office capabilities that Apple TV now offers, including the ability to conveniently control their offices and home environments using Siri’s voice controls and Apple’s HomeKit. And for those lawyers who use Apple TV in conjunction with their iPad for trial presentation, the more user-friendly interface and remote will greatly simplify the set-up process once you’re in the courtroom.

All in all, the updates and new features rolled out for the fourth generation Apple TV make it well worth the upgrade. If you already use Apple TV or have been waiting for a better version before trying it out, it’s time to make the move. The new Apple TV is already a great improvement and, as new third-party apps are released, will undoubtedly only improve with time. Although not a perfect device, it’s much better than earlier versions. So if you’re ready for a more intuitive and less frustrating television and streaming experience, Apple TV is exactly what you need.

Nicole Black is a Rochester, New York, attorney and the Legal Technology Evangelist at MyCase, web-based law practice management software. She has been blogging since 2005, has written a weekly column for the Daily Record since 2007, is the author of Cloud Computing for Lawyers, coauthor of Social Media for Lawyers: The Next Frontier, and coauthor of  Criminal Law in New York. She is easily distracted by the potential of bright and shiny tech gadgets, along with good food and wine. You can follow her on Twitter at @nikiblack, and she can be reached at niki.black@mycase.com.