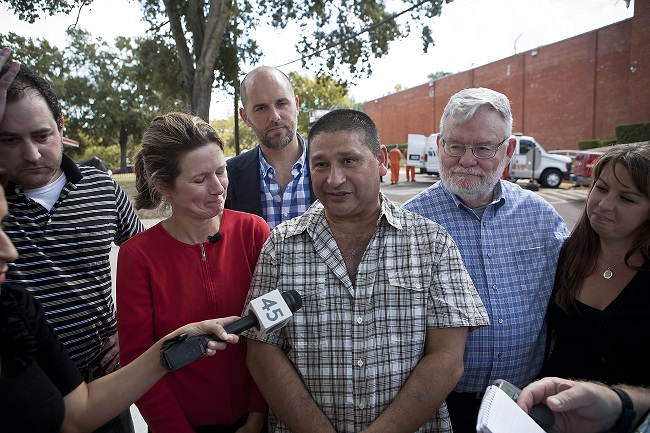 Mr. Velez and his defense team after his release

On October 8, 2014, Manuel Velez was released from Texas’ death row thanks to the untiring work of a remarkable team of pro bono lawyers at Lewis Roca Rothgerber LLP and Carrington, Coleman, Sloman & Blumenthal, LLP, along with capital defenders at the American Civil Liberties Union (collectively “Team Velez”). Team Velez worked for more than five years to investigate and present evidence of their client’s innocence, ultimately convincing a court to overturn his conviction in early 2013. After prosecutors threatened to retry Mr. Velez and again seek the death penalty, he agreed to plead guilty to lesser charges in exchange for his release.

Mr. Velez’s journey through the Texas criminal justice system began in 2005, when his girlfriend’s one-year-old son died of head trauma. The State argued at trial that the boy died as the result of head injuries that were inflicted at some point during the two weeks before he died. The timing of the boy’s injuries was critical to the State’s case, since Mr. Velez had been working out of state and only returned home two weeks before the child’s death. This theory was supported by expert testimony and further bolstered by Acela Moreno, the victim’s mother. Initially, Ms. Moreno was charged with capital murder along with Mr. Velez, but in exchange for her testimony against Mr. Velez, Ms. Moreno received a ten year sentence, of which she served only five years.

Mr. Velez’s trial lawyer failed to present any exculpatory evidence or expert testimony to challenge the State’s theory. His lawyer also failed to introduce evidence of Ms. Moreno’s history of violence and neglect toward her children or reveal that she had received a plea deal in exchange for her testimony. Meanwhile, another lawyer took payments from Mr. Velez’s family for an entire year before admitting that he was not qualified to work on capital cases.

Team Velez began work on the case in 2008 after the Project recruited Carrington Coleman and Lewis Roca to provide pro bono representation to Mr. Velez. As the team worked against the clock to prove their client’s innocence, they also dedicated time and energy to building a close relationship with Mr. Velez and his family. Meetings with Mr. Velez were focused and personal, with every effort made to use Spanish, Mr. Velez’s first language, to form a strong attorney-client bond. “They gained my brother’s trust, educating him about his case,” said his sister, Elmita Velez. In a touching letter she spoke of the personal care her family received from the attorneys saying, “I felt for my brother that he was not alone and forgotten . . . they give us all comfort and hope, and I am thankful.”

This level of compassion coupled with a fierce determination to fight for Mr. Velez’s life were the key to Team Velez’s success. Together they left no stone unturned on their mission to amass exculpatory evidence.

One significant piece of evidence uncovered by Team Velez was a tissue analysis report of the victim’s brain, incorporated into the original autopsy report but not discussed at trial. This report described the injury as a “subdural hematoma that was more than two weeks, and perhaps as much as six months, old at the time of death.” Upon the team’s request for an advanced analysis, the neuropathologist who authored this initial report stated that the child’s cranial trauma was chronic and at least 18-36 days old. This fact placed the fatal injury within a critical time frame during which Mr. Velez was confirmed to be 1,000 miles away working in Tennessee. To put this scientific finding into context, the legal team found multiple witnesses who testified that the child’s mother had a history of abusing her children, including dropping them, throwing them, and even burning them with cigarettes.

In 2012, after years of diligent efforts, Team Velez won a major victory when Mr. Velez’s death sentence was overturned on direct appeal by the Texas Criminal Court of Appeals on the basis of faulty and controversial testimony during the sentencing phase of trial.

Because they believed so strongly in Mr. Velez’s innocence, the team remained committed to the case even after they had won sentencing relief for their client and worked tirelessly to overturn his conviction. For this devotion to justice for their client, the Project proudly presented Lewis Roca and Carrington Coleman with an Exceptional Service Award at its 2013 Volunteer Recognition & Awards Event in Washington, DC. Later that year on October 23, 2013, the team’s efforts were rewarded when the Texas Court of Criminal Appeals, on recommendation of 404th District Court Judge Elia Cornejo Lopez, found that Mr. Velez’s constitutional rights were violated when trial counsel “failed to conduct an adequate investigation” and remanded the case for a new trial.

Following the court’s decision, Cameron County prosecutors announced their intention to retry the case and again seek the death penalty. Rather than risk another miscarriage of justice, Mr. Velez agreed to plead guilty to lesser charges and was sentenced to time already served. On October 8, he walked out of the state prison at Huntsville and was greeted by Team Velez as a free man. Tamara Goodlette of Lewis Roca reports that Mr. Velez is “as happy as can be” and is enjoying spending time with his family and elderly parents.