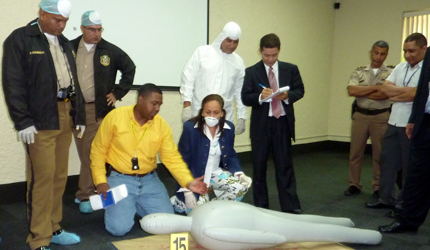 ABA ROLI training in crime scene protection promotes respect for proper procedures and for the rights of victims and suspects alike.

In recent years, Central America has seen a rise in violence linked to drug trafficking and organized crime. The region’s strategic location between the world’s largest drug-producing nations in the south and the largest drug-consuming markets in the north has created numerous drug smuggling routes across Central America. This transformation represents a significant challenge to local law enforcement institutions, particularly in the region’s “Northern Triangle” nations of El Salvador, Guatemala and Honduras. In 2010, these three countries experienced some of the highest murder rates in the world, with 66, 41 and 82 homicides per 100,000 citizens, respectively. Because justice sector institutions throughout the region are often ill-equipped to properly investigate, prosecute and process criminal cases, a significant number of these crimes go unsolved.

To address this need, the ABA Rule of Law Initiative (ABA ROLI) launched its Central America program (which operates in El Salvador, Guatemala, Honduras, Belize and Panama) in late 2011, with funding from the U.S. Department of State’s Bureau of International Narcotics and Law Enforcement Affairs. By providing technical assistance to those justice sector officials who are integral to the criminal investigation process, ABA ROLI hopes to strengthen these actors’ ability to use forensic science to combat impunity and citizen insecurity in the region.

In the Northern Triangle countries, we seek to address rising concerns over the preservation of crime scenes and the processing of evidence. Concentrating on the deficiencies that each nation faces, ABA ROLI will conduct process engineering and training activities on the basic elements of criminal investigations and forensic procedures for police officials, crime scene technicians and forensics experts. Moreover, U.S. and regional experts will conduct trainings for justice administrators on a wide variety of forensics-related topics, including crime scene protection, chain of custody, selection of expert witnesses and basic evidence collection techniques.

Although two of the program’s objectives focus on the Northern Triangle nations, ABA ROLI will also implement several initiatives in Belize and Panama. In addition to establishing forensics working groups to increase coordination between forensics laboratories and prosecutors in each country, ABA ROLI will develop a regional “evidentiary bench book” to provide judges and prosecutors with a reference guide for presenting and evaluating forensic evidence.

Led by Program Director Tanya Montoya de Amaya, the program recently opened its office in Panama City, Panama. Montoya has traveled to El Salvador, Guatemala, Honduras, Belize and Panama to conduct an initial assessment of their forensics capacity and to establish local working groups. As the program prepares to move forward with activities, it will closely coordinate with other ABA ROLI programs in Belize, Guatemala and Panama.