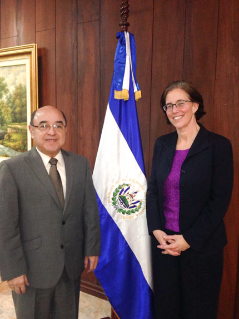 Launched in 2011 with funding from the U.S. Department of State’s Bureau of International Narcotics and Law Enforcement Affairs, the program focuses on enhancing the justice sector stakeholders’ ability to use forensic evidence—including DNA, fingerprint and ballistics analyses—in combating crimes, especially those committed by transitional criminal organizations. The program originally covered five countries, including Belize, Honduras and Panama. McCullough said that the program now focuses exclusively on El Salvador and Guatemala “to maximize impact and to address these countries’ tremendous needs.”

El Salvador and Guatemala—with homicide rates of 61.6 and 37.5 per 100,000, respectively—currently rank in the top five, and constantly rank in the top 10, countries with the highest homicide rates worldwide. ABA ROLI has helped form inter-institutional working groups in both countries to enhance coordination between forensics labs and other law enforcement agencies, such as police, offices of attorneys general and judicial councils. ABA ROLI also holds training workshops for police, prosecutors, forensics experts and judges on a variety of topics, including crime-scene investigation and use of forensic evidence at trial. Additionally, in El Salvador, ABA ROLI helps the forensics division of the police improve its institutional procedures for management of forensic evidence.

Following its meeting with ABA ROLI staff in San Salvador to discuss ongoing ABA ROLI work in Central America, the delegation visited the U.S. Embassy in El Salvador and discussed ABA ROLI programs in the region and potential future collaboration with embassy staff, including Ambassador Mari Carmen Aponte. The ABA ROLI delegation also met with the José Armando Pineda Navas, president of the Supreme Court, and representatives from the National Police, the Institute of Legal Medicine and the Attorney General’s Office. Navas thanked ABA ROLI for training judges on the application of evidence law to forensic issues, while National Police representatives noted the importance of ABA ROLI trainings on crime-scene investigation.

The delegation later visited two pre-trial detention facilities, bartolinas, which have nonetheless served to confine people even after trial. “Our visits to the facilities demonstrated the tremendous need for technical assistance to protect the human rights of pre-trial detainees and make the system work effectively.” said McCullough, “The facilities were overcrowded, unsanitary and dangerous for detainees and staff alike.”

During its January 21–23 stay in Guatemala, the ABA ROLI delegation met with representatives from the U.S. Embassy and with Attorney General Thelma Esperanza Aldana Hernández. Discussions covered ongoing ABA ROLI activities in Guatemala, including forensics trainings for prosecutors and police, as well as potential additional areas of collaboration. The delegation also met with representatives from the National Institute of Forensic Sciences, the Guatemalan Bar Association and the Inter-American Development Bank and talked about opportunities for coordinating ABA ROLI initiatives with other stakeholders’ reform efforts.

Andersen said that the trip laid important groundwork for the future. “It’s a critical moment for rule of law development in these countries. Either the gang violence and lawlessness will continue to spread, or our justice sector partners, with our support, can begin to tip the balance toward law and order,” she said. “I’m gratified by the commitment we heard from our partners, the plans we have made to redouble our efforts and the support we have received from the U.S. Department of State to pursue these plans over the next three years.”

To learn more about our regional forensics program in Central America, contact the ABA Rule of Law Initiative at rol@americanbar.org.