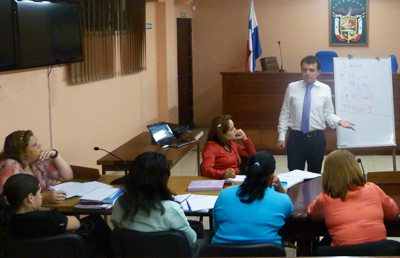 Under Panama’s new criminal justice system, victims and defendants may benefit now from the use of more efficient and expeditious alternatives to court litigation.

Fernando, a 24-year-old college student and resident of Veraguas Province in Panama, acted impulsively after a night of drinking. An unattended motorcycle caught his attention, and without thinking, he decided to take the vehicle for a weekend of fun. Fernando’s plan ended abruptly when police officers stopped him for a routine traffic violation the next day. Almost carelessly and without reflecting on the seriousness of his actions, Fernando admitted to stealing the motorcycle and was promptly arrested.

Unbeknownst to Fernando, his prospects for amending his actions and securing his freedom were bleak. Theft in Panama carries a minimum sentence of seven years in prison for a first-time offender. Moreover, backlogs in the Panamanian court system would mean that Fernando would face pre-trial detention of no fewer than 15 months while awaiting trial. In short, a young college student’s hopes for a rewarding career and a stable personal life were in jeopardy.

Fortunately for Fernando, Veraguas Province—along with Coclé Province—had adopted an accusatorial criminal justice system, allowing greater respect for the rights of defendants, in September 2011. With the ABA Rule of Law Initiative’s (ABA ROLI’s) assistance, Panamanian justice administrators are working tirelessly to implement the new model, which is rooted in a more adversarial process and features transparent, oral trials. The system, which is expected to be implemented nationwide by September 2014, is more expeditious and less corruption-prone. It also permits greater use of alternative dispute resolution mechanisms, such as mediation, for minor crimes, avoiding protracted court cases, producing more proportional restitution and clearing years’ worth of case backlog.

Using the new system, Fernando’s attorneys resolved the case in less than a week through mediation. Fernando agreed to pay damages to his victim in the form of his own motorcycle, a gold ring and $300. While the compensation was a hefty monetary price for Fernando and his family, it allowed him to avoid a likely conviction coupled with a harsh penalty. Further, the case was resolved before entering the judicial system, allowing Fernando to maintain a clean criminal record and taking some pressure off of the already overworked court system.

To assist with the accusatorial system implementation, ABA ROLI provides technical support and trainings in Panama. Since August, ABA ROLI has trained more than 800 public defenders, judges, prosecutors, private lawyers, law students and non-governmental organization representatives, and the efforts are paying off.

Jennifer Arauz, one of Fernando’s public defenders, said, “[The] technical guidance and training instilled confidence in us to carry out our work in the midst of profound changes to the way that we provided legal support to our clients in the past.”

The efforts have also helped secure Fernando a second chance. “I am very grateful with the support that I received from public defenders,” said Fernando. “Without their help I would be still in prison. I intend to focus now on my studies and finish college.”

ABA ROLI initiatives in Panama are supported by the United States Agency for International Development.

To learn more about our work in Panama, contact the ABA Rule of Law Initiative at rol@americanbar.org.