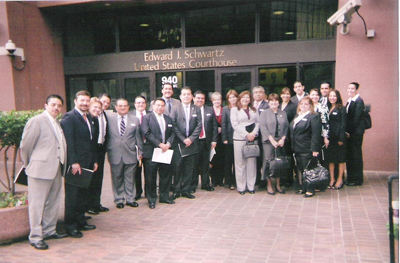 As part of their San Diego visit, the Mexican judges observed a number of criminal court proceedings and met with various U.S. federal and state judges.

Despite being physically separated by just miles, court systems along both sides of the U.S.-Mexican border have traditionally faced significant obstacles in working together on issues of mutual interest. With border violence now reaching critical levels and Mexico’s state-led efforts towards comprehensive legal reform in full swing, the need for cross-border collaboration is greater than ever.

To open direct channels of communication between U.S. and Mexican judges, the ABA Rule of Law Initiative (ABA ROLI) recently coordinated a “sister courthouse” visit to San Diego, California. The visit was the first step of an anticipated long-term, sustained dialogue on the challenges and lessons of managing oral trials, as part of ABA ROLI’s Support for Law Schools, Bar Associations, and Judicial Exchanges in Mexico Program funded by the United States Agency for International Development.

The Mexican delegation included 14 federal judges from nearby Tijuana and Ensenada, and representatives from the American Citizens Services division of the U.S. Consulate in Tijuana. The group traveled to San Diego for the day, where they were hosted by the Honorable M. Margaret McKeown, Judge for the Ninth Circuit Court of Appeals, and chair of ABA ROLI’s Latin America and Caribbean Council.

The Mexican judges observed a number of criminal court proceedings and met with various U.S. federal and state judges. Judges from both countries exchanged ideas about their respective roles and responsibilities in strengthening cross-border ties. The event proved valuable in raising awareness of how justice is administered in both countries, helping to dispel long-standing misconceptions and fostering open dialogue about best practices. The visit concluded with both groups expressing their strong support for peer judicial exchanges, and for ABA ROLI’s sister courthouse program.

To learn more about the ABA Rule of Law Initiative’s work in Mexico, contact us at rol@staff.abanet.org.