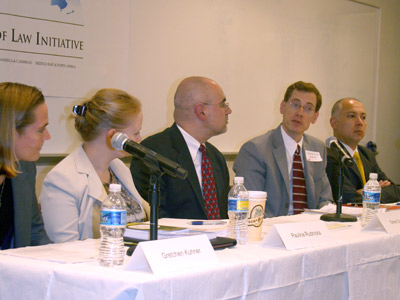 During an October 15 event at ABA Rule of Law Initiative (ABA ROLI) headquarters in Washington, DC, human trafficking experts and stakeholders took part in a discussion of ABA ROLI’s Human Trafficking Assessment Tool (HTAT) for Mexico, and of the human trafficking phenomenon in North, Central and South America.

During the first part of the panel, Gretchen Kuhner, who served as the assessor in Mexico, and Paulina Rudnicka, ABA ROLI’s HTAT coordinator, provided an overview of the methodology and key findings of the HTAT. The panel also included Ambassador Mark Lagon, who served as director of the U.S. Department of State’s Office to Monitor and Combat Trafficking in Persons and is currently the executive director of the Polaris Project, and Fernando Garcia-Robles, anti-trafficking in persons coordinator with the Organization of American States.Both Ambassador Lagon and Mr. Garcia-Robles praised the report, and added their own perspectives about trafficking in persons both within Mexico and across its borders, as well as other human trafficking concerns in the hemisphere. Simon Conté, director of ABA ROLI’s Research and Assessments Office, moderated the event.

To learn more about our human trafficking work or our programs in Latin America, e-mail the ABA Rule of Law Initiative at rol@staff.abanet.org.