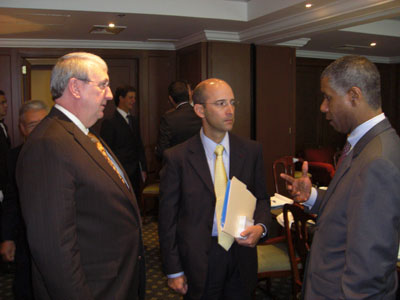 American Bar Association (ABA) President Tommy Wells and an accompanying delegation from the ABA Rule of Law Initiative (ABA ROLI) visited Mexico City to convey ABA support for the ongoing criminal justice reforms occurring there, and to express ABA ROLI’s willingness to provide technical assistance.  From January 12–15, Mr. Wells met with Mexican Attorney General Eduardo Medina-Mora; Mexican Chief Justice and President of the Judicial Council Guillermo Ortiz Mayagoitia; the presidents of the Mexican Bar Association and Inter-American Bar Association; and representatives from the U.S. Embassy and the U.S. Agency for International Development. ABA ROLI has recently assisted the Mexican government with alternative dispute resolution programs and is well-positioned to aid in the transition from an inquisitorial to an accusatorial legal system. The transition entails introducing oral trials with live witness testimony, confrontation of evidence and more effective separation of investigative, prosecutorial and judicial functions.

It is anticipated that the implementation of the accusatorial system will require significant technical assistance, including training of justice sector operators nationwide, strengthening of bar associations and reform of legal education. Some of this assistance will be provided by the U.S. government through the Mérida Initiative, a $1.4 billion assistance package intended, in part, to combat organized crime in Mexico.

During meetings with Chief Justice Mayagoitia, Judicial Council members expressed concerns about the integrity of judicial operators and the need for controls against corruption. Council members also cited a desire for judicial training on the reforms which will require them to arbitrate oral trials in the near future. Attorney General Medina-Mora echoed the need for training and capacity-building and expressed a desire not only to increase the quantity and quality of training, but also to change the attitudes of prosecutors, judges and attorneys on the openness and transparency of oral trials. ABA ROLI staff also visited the Federal Public Defender’s Office and the Universidad Nacional Autónoma de México (National Autonomous University of Mexico), where they relayed Mr. Wells’ message of support.

In each meeting, the delegation stressed the importance of integrated trainings for judges, prosecutors, defense attorneys and investigators to create an effective and practical learning environment. ABA ROLI assistance was well-received, with all parties expressing their appreciation for and openness to receiving technical assistance.

Local ABA ROLI staff briefed Mr. Wells on an ongoing assessment of human trafficking in Mexico. The study is part of a U.S. Department of State-funded project. Mexican actor César Ramos, star of the movie “Trade,” which addresses the issue of human trafficking, contributed to the conversation.

As a result of the discussions, a draft work plan is being prepared for ABA ROLI assistance to the Mexican justice sector under the Mérida Initiative. The work plan is anticipated to be discussed in the coming weeks with U.S. government officials and with Mexican counterparts in preparation for its full implementation.

To learn more about our work in Mexico, contact the ABA Rule of Law Initiative at <rol@staff.abanet.org>.