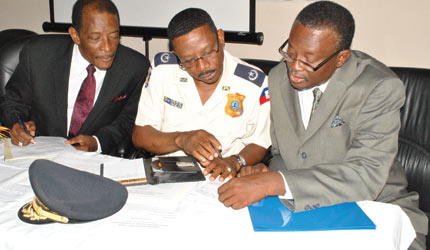 The training included a series of interactive practical exercises aimed at improving cooperation between participants.

Nearly two years after the January 2010 earthquake that rocked Haiti and sparked a humanitarian crisis, the nation is struggling to maintain order anduphold the rule of law. Setbacks in rebuilding the country have hampered efforts to reform its promising but fragile judicial system. The extremely low—3 percent—conviction rate in criminal cases and the nation’s poor record inthe fight against drug trafficking and money laundering bear witness to the status of the judicial system. International and Haitian observers, including justice sector operators, cite lack of proper training on current Haitian laws, particularly criminal laws, and poor coordination among justice sector institutions as major deficiencies.

To help address these challenges, the ABA Rule of Law Initiative (ABA ROLI)launched its Haiti program in March 2011. ABA ROLI has since developed a series of innovative inter-institutional training programs to promote a singular, cohesive vision of the criminal justice system among Haitian judges and police. ABA ROLI’s work has also brokered a partnership between Haiti’s Magistrate School and the National Police Academy—institutions that are not only critical tothe effectiveness of the justice system but will also help in repairing the rift between the Haitian judiciary and law enforcement.

From August 29–September 2, ABA ROLI held its inaugural training for 36 judges, prosecutors and police investigators covering the topics of drug trafficking and money laundering. To build consensus on combating these crimes,the workshop provided an overview of the country’s drug trafficking- and money laundering-related legislation and procedures. A series of interactive exercises aimed to improve cooperation between participants and covered a range of topics, from investigative techniques and best practices to internation allegal standards and legislation.

In addition to fostering constructive discussions on several criminal issues plaguing Haiti, the training allowed the participants to gain perspectives from a diverse group of professionals working in the judicial and financial sectors. Participants, trainers and stake holders rated the workshop as highly informative and expressed a strong interest in participating in future trainings.

In coordination with the Magistrate School and the Police Academy, ABA ROLI will hold four more inter-institutional trainings between October 2011 and March 2012. ABA ROLI’s program in Haiti is supported by the U.S. Department of State’s Bureau of International Narcotics and Law Enforcement Affairs.

To learn more about our work in Haiti, contact the ABA Rule of Law Initiative at rol@americanbar.org.