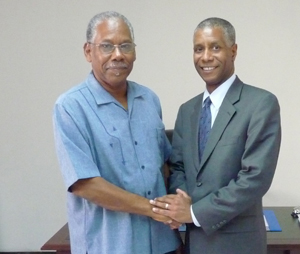 During the Haiti visit, the ABA ROLI delegation met with the minister of justice, the secretary of state for criminal affairs, the special advisor to the president and representatives from the Port-au-Prince Bar Association and the judicial training academy.

Following an invitation from the Haitian government, a delegation from the ABA Rule of Law Initiative (ABA ROLI) traveled to Port-au-Prince in late March.The purpose of the trip was to meet with Haitian officials to discuss how to best support the country’s ongoing recovery from January’s devastating earthquake.

The delegation, composed of Chief Justice Robert H. Henry, Jr., of the U. S.Court of Appeals for the Tenth Circuit (an ABA ROLI board member) and ABA ROLI staff, met with the minister of justice, the secretary of state for criminal affairs, the special advisor to the president and representatives from the Port-au-Prince Bar Association and the judicial training academy. ABA ROLI staff also participated in an international conference on the draft Criminal Procedure Code, currently under review by the Haitian government, and conducted a survey of logistical needs to support any future ABA ROLI program.

Estimates indicate that about 80% of the justice sector in and around the capital city was affected by the earthquake. This reduction in service comes ata time when both civil disputes and criminal activity are on the rise, given post-earthquake conditions. As relief efforts continue, the Haitian government and international donors alike are addressing both immediate needs as well as longer-term, systemic reforms, including promotion of the rule of law.

Looking ahead, ABA ROLI will continue its dialogue with Haitian and international officials to collaborate on a series of proposals for long-term assistance to the Haitian justice sector.

To learn more about our work in Latin America and the Caribbean, contact rol@staff.abanet.org.