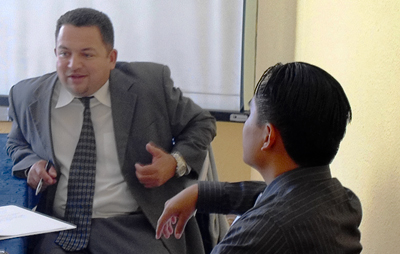 An ABA ROLI training instructor confers with a participant during an interactive exercise on oral trial skills.

In the midst of a bloody conflict that claimed the lives of more than400,000 citizens and seriously jeopardized Guatemala’s democratic institutions,the nation became one of the first in Latin America to introduce comprehensive reforms to its Criminal Procedure Code and Criminal Code in1992 and 1994, respectively. Despite the conflict, which ended in 1996, there forms instituted significant changes to the Guatemalan judicial system. They established an adversarial system, including public, oral trials, expanded dueprocess guarantees and introduced the right to confront witnesses.

Nearly two decades later, procedures for evidence introduction and trial conduct remain relatively under developed and many Guatemalan lawyers are notyet accustomed to oral trials. The ABA Rule of Law Initiative (ABA ROLI), with funding from the U.S. Department of State’s Bureau of International Narcotics and Law Enforcement Affairs, trains justice sector operators to improve operation of the accusatorial system. From October 24–28, ABA ROLI hosted anoral trial skills training for 34 local prosecutors and members of the National Police. Led by international trainers, sessions addressed such topics as casetheory, cross-examination and evidence. Participants also put the techniquesthey learned into practice during interactive demonstrations and a mock trial.

Alfonso Sierra, ABA ROLI country director in Guatemala, said that the training reframes “the approach to [judicial] work along with investigation,”underscoring “effective techniques to support cases before courts” and helpingreduce crime in the country.

The training and especially its communication aspects were well-received.Gloria Odilia Pérez, an anti-narcotics prosecutor from Guatemala City, said“The training applies in a direct way to our everyday line of work; the techniques learned go hand-in-hand with Guatemala’s oral system and are alignedwith the new reforms to our Criminal Procedure Code.” Another prosecutor noted that the training “was an excellent reminder of the essence ofour work,” while others suggested that the trainings be institutionalized within the justice sector.

Continuing its support for the ongoing reforms, ABA ROLI will hold similar training in January 2012. It will also offer trainings on specialized investigation techniques.

To learn more about our work in Guatemala, contact the ABA Rule of Law Initiative at rol@americanbar.org.