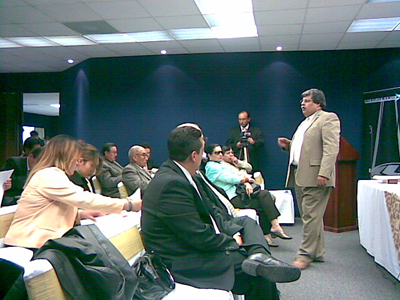 Prosecutors, police and judges in Ecuador are praising a recent criminal lawtraining on the country’s new adversarial trial system.  This positive response from the participants underscored the ABA Rule of Law Initiative’s (ABA ROLI) success in bridging systemic change with public education in rule of law promotion.

Ecuador’s recent move from an inquisitorial legal system to an adversarial system has advanced the rule of law in the country.  Still, many lawyers and judges lack familiarity with such a system, ultimately diluting its effectiveness.

ABA ROLI recognizes that it is helpful for members of the legal system tohave frequent discussions on the nuts and bolts of criminal justice issues. These issues, covered among others in the trainings, include: police investigations,trial preparation, and explanation of the judge’s oversight of procedures and evidence.

The October 2007 training was the second in a three-part series on the new adversarial system.  ABA ROLI organized the trainings in Quito, Guayaquil, Loja, and Riobamba during the first two weeks of October.  In every city, participants lauded the dynamic and interactive instruction, and many asked for more training on a regular basis.  One prosecutor noted that the workshop“has had a direct impact on our daily practice and increased the chances that we will be successful in prosecuting cases.”

The third and final set of trainings will take place in Ecuador in February, 2008.