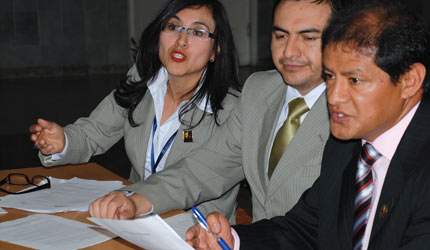 Participants debate whether public officials have breached their duty of trust during a case analysis session at the Transparency Summit.

In an effort to address public demands to overhaul a judicial system long viewed as soft on crime, corrupt and inefficient, earlier this year, EcuadorianPresident Rafael Correa initiated a complex governmental reorganization process that includes restructuring the Judicial Council, an overarching body that oversees all judicial operators. While heralded by some citizens as a step inthe right direction, this reform—which among other things would lead to the removal of operators perceived as corrupt and inefficient—has left judges,prosecutors and police in a state of uncertainty.

The ABA Rule of Law Initiative (ABA ROLI) kicked off its efforts to support two main aspects of this reform—transparency and ethics—by hosting two eventsin October for about 50 judges, prosecutors, defense lawyers, law professors and students, and other justice sector operators from various agencies.

From October 6–7, ABA ROLI held a transparency summit at the Ecuadorian National Court in Quito. The interactive presentations aimed at equippingparticipants with skills that increase their contributions to the ongoing judicial reform process.

A diverse panel of international experts—including the Hon. Jack Nevin and the Hon. Matthew Williams, both of the Washington State district court, and Mexican legal consultant Samuel González—presented on a variety of topics, including best ethical practices, standards of conduct and the importance of transparency in public service. Attendees also analyzed and debated fictionalized public-corruption cases.

Summit participants said that their careful study of a transparent judicial system will help them implement the judicial reforms approved in a January 2011 public referendum.

Judge Williams said that the efforts to develop a transparent, effective judicial system “are crucial as Ecuador works to combat the challenges thatconfront it.” He added, “The bottom line is that no democracy can survive apublic perception that its government is non-responsive or perceived to be subject to unfair influence or corruption.”

“I've found that no matter where I am in the world, the challenges facingnations in implementing rule of law principles are the same,” said judge Nevin,after observing the enthusiasm of the participants. “The commitment of Ecuadorians to a sound system of justice based on democratic principles was inspiring.”

On October 10, ABA ROLI held an ethics summit in Quito to complement the transparency summit. The ethics summit focused on the religious, moral and practical underpinnings of ethics, using an alternative approach to build upon the premise that ethical standards are fundamental to an accountable judicial system. The event featured a diverse panel of speakers from Ecuador, Colombia and the United States, including Edward L. Queen II, director of Emory University’s Center for Ethics, and the Hon. M. Margaret McKeown of the Ninth Circuit Court of Appeals and chair of ABA ROLI’s Latin America and Caribbean Council.

Queen said that the event helped highlight the importance of ethics in theirprofession. “The energies put into the workshops do a great deal to impressupon participants the importance of an ethical culture in the administration ofjustice,” he said. “[And] the recognition of its importance paves the way forthe successful introduction of content that the participants will then striveto implement.”

From January through November, ABA ROLI—supported by the U.S. Department ofState’s Bureau of International Narcotics and Law Enforcement Affairs—trained nearly 4,000 law students, judges, defense lawyers, prosecutors and police inEcuador. The trainings covered topics ranging from trial skills and transnational crimes to legal reform and transparency. In addition to holding further practical trainings, ABA ROLI will support both the adoption ofcurricular reforms to stress legal ethics in law schools and the implementation of a nationwide ethics code for all judicial operators and practicing attorneys.

To learn more about our work in Ecuador, contact the ABA Rule of Law Initiative at rol@americanbar.org.