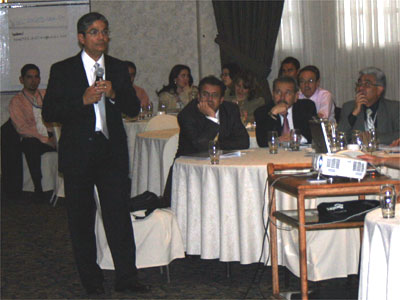 Greater cooperation and broader communication were the key themes at afour-day conference publicizing the expanded role of the Unidad de Inteligencia Financiera (Financial Intelligence Unit) as an active investigative unit responsible for analyzing potential cases of corruption andmoney laundering in Ecuador. The event, which was sponsored by the American BarAssociation Rule of Law Initiative and the U.S. Department of Treasury, brought together representatives from throughout the Ecuadorian legal system. The conference featured both Ecuadorian and international speakers, including a U.S. federal court judge, an organized crime expert from the United Nations Office on Drugsand Crime, a lead analyst from the Peruvian Financial Intelligence Unit, and acompliance officer from a major international bank.

By bringing together various disciplines, the conference underscored the importance of increased cooperation and collaboration on issues surrounding theinvestigation and prosecution of money laundering and corruption cases. Speakers covered a wide array of related topics, including government corruption, the enforcement of anti-money laundering laws, the relationship between money laundering and commercial activities, and international efforts to combat money laundering. Also addressed was the distinction between theinvestigative and prosecutorial processes and how, under Ecuador’s new criminal code, greater investigative responsibilities have been placed on thepolice. First-hand accounts were also provided during the event, with police,judges and prosecutors discussing specific cases in which they had beeninvolved and a mock trial of a federal agent accused of taking bribes.