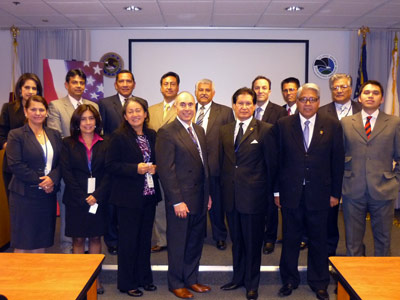 The delegation was hosted by the L.A. County District Attorney’s Office and the U.S. Attorney’s Office. Meetings with law enforcement officials and judges allowed the participants to analyze best practices for investigating and prosecuting ‘special crimes,’ such as narcotics trafficking, money laundering and human trafficking.  Participants also had an opportunity to consult with District Attorney Steve Cooley, as well as with state and federal judges,including the Honorable Peter Espinoza, presiding judge of the L.A. County criminal courts, and the Honorable Margaret M. Morrow, a federal district court judge.

The Ecuadorian officials also met with federal and state prosecutors and investigators, and observed pre-trial and trial proceedings in both state and federal courts.  In addition, they toured the L.A. County Criminal Court Jail, which is the largest in the country and regarded as the safest despite handling some of the most violent inmates in the nation. Beyond structured presentations, the tour also allowed delegates to engage informally with their U.S. colleagues during luncheons and dinners.

ABA ROLI Ecuador Country Director Al Amado, who led the participants on the tour, reported, “Many of the delegates cited that the first-hand knowledge gained on this study tour is the best way for them to learn how they can improve special crimes investigation and prosecution, and the criminal justice system generally, in Ecuador. It gives them both a target to shoot for and away to get there.”

Ecuador’s Attorney General Washington Pesántez Muñoz said, “The analysis of best practices in the North American criminal justice system is very valuable in helping the institution I represent continue in its efforts to improve its service to the Ecuadorian society in access to criminal justice.”

The tour is one component of ABA ROLI’s wider efforts to support the country’s transition to an accusatorial system.  Funded by the U.S.Department of State’s Bureau of International Narcotics and Law Enforcement Affairs, the program also features training for the legal community, including police, judges, prosecutors and law students, to increase their understanding of and exposure to the new adversarial criminal procedure.

To learn more about our work in Ecuador, contact the ABA Rule of Law Initiative at <rol@staff.abanet.org>.You can also visit the program’s Spanish-language website at www.justiciapenalecuador.com.ec