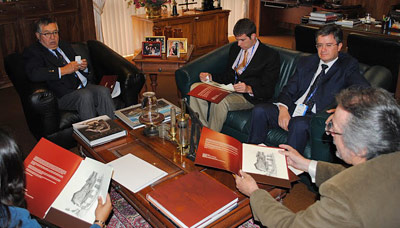 Judge Carlos Lucero of the U.S. Court of Appeals for the 10th Circuit (left) meets with the president of the Universidad del Azuay in Cuenca during a May visit to Ecuador.

While Ecuador’s transition from an inquisitorial to an adversarial justicesystem is steadily progressing, the lack of standardized curricula in lawschools threatens to undermine the education of future attorneys. Moreover, a substantial number of practicing attorneys have never received adequatetraining on the system.

Operating under a recent follow-on grant from the U.S. Department of State,the ABA Rule of Law Initiative (ABA ROLI) has expanded its offerings in trial advocacy training for law schools and bar associations, strengthening thetransparency component of the training by promoting ethics in all of itsworkshops. Last month, ABA ROLI conducted two separate trainings on trialadvocacy skills in criminal cases in the city of Cuenca. Following presentations and discussions, participating students and attorneys practiced trial skills side-by-side with international instructors.

From May 19–21, ABA ROLI held its university course on oral trial skills incriminal cases, featuring instructors from Colombia and the United States. About 80 students from five law schools in Cuenca attended the workshop onthe investigation, development and presentation of a criminal case under the adversarial legal system. The course included two days of lectures and smallgroup sessions, and culminated with a mock trial competition. Judge Carlos F.Lucero of the U.S. Court of Appeals for the 10th Circuit and Juan Morales Ordóñez, a law professor and former Ecuadorian Supreme Court justice, presenteda special section on ethics. Throughout the training, the instructors stressedthe importance of candor, integrity and dignity in the trial process and in thelegal profession in general.

Additionally, from May 20–24, ABA ROLI held a series of four university workshopson oral trial skills in criminal cases, offering some 150 students an overviewof the criminal trial process in a lecture format. In response to a highdemand, the trainings were offered three times in Quito and once in Cuenca. Students from the International Law School and the Central Law School, and members of the Quito Bar Association attended the courses.

ABA ROLI Country Director Al Amado said, “It is really difficult for law students and practitioners to have access to the quality of training we provide free of charge. Hearing from international presenters is rare, and practicing skills side-by-side with them is rarer still.”

ABA ROLI will expand the ethics component of this program by including an enhanced module that highlights the potential ethical issues faced by judges,defense lawyers and prosecutors during a trial. Future ethics courses will highlight best practices for all judicial operators.

To ensure sustainability, ABA ROLI strives to strengthen ties with the country’s universities and encourages their law schools to incorporate standardized trial-skills courses and a mandatory ethics course in their curricula. On April 28, Amado facilitated a meeting with five law schools in Cuenca. During the meeting, the law schools agreed to create a network of law schools,which would help strengthen judicial research; incorporate the study of oralcriminal litigation and applied ethics in law curricula; and encourageprogressive involvement of institutional actors to promote academic improvement.

“This agreement is an important first step toward comprehensive, country-wide curricular reform,” said Amado, “Since Cuenca is viewed as aleader in legal education, this should help spur other major law schools toward moving in this direction.”

To learn more about our work in Ecuador, contact the ABA Rule of Law Initiative at rol@americanbar.org.