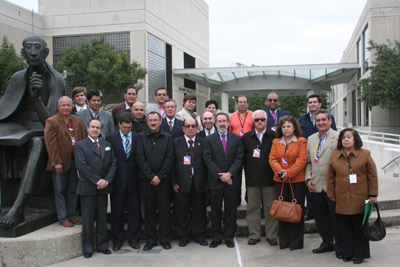 A 17-member delegation of Ecuadorian jurists visits the University of Houston Law Center as part of a study tour.

The ABA Rule of Law Initiative (ABA ROLI) hosted a week-long study tour fora 17-judge Ecuadorian delegation. The purpose of the late October visit to Houston, Texas, was to allow the judges to observe multiple components of the U.S. criminal justice system and to support their understanding of, and involvement in, Ecuador’s transition to an accusatorial system. In addition, the trip was designed tofoster relationships between U.S. and Ecuadorian legal professionals. Thedelegation was led by Benjamin Cevallos Solórzano, president of the Council ofthe Judicature of Ecuador, and organized by Al Amado, ABA ROLI country directorin Ecuador, in partnership with Houston-area law schools, courts and the district attorney’s office.

The trip provided extensive exposure to both state and federal courts, andallowed the judges to observe how a typical criminal case is processed. District Court Judge Gray Miller and Magistrate Judge Calvin Botley provided anoverview of the U.S. legal system, while the clerk of court spoke on online case management. The judges observed both initial hearings and guilty pleas, along with two major trials in progress. A portion of the week emphasized the appellate process, during which the judges visited the First Court of Appealand Fourteenth Court of Appeal and witnessed an appellate argument. During these visits, presentations focused on the differing roles of the trial and the appellate courts in the common law system and on the value of precedent in the U.S. system.

District Attorney Patricia Lykos and her staff met with the delegation todiscuss the investigation and prosecution of special crimes such as child pornography, financial crimes, consumer frauds and vehicular offenses. Additionally, the judges received instruction on courtroom automation, technological advancements in court administration, and innovative programs totreat offenders, such as diversionary programs for drug offenders.

Throughout the week, luncheon events featured speakers on a judge’s role asa protector of human rights in Latin America, civil liberties protections afforded under the U.S. Constitution, the applications and implications of theForeign Corrupt Practices Act in Latin America, and the use of alternative dispute resolution in both civil and criminal proceedings.

In addition to structured visits and presentations, the tour allowed the visiting judges to build relationships with U.S. attorneys and judges during various social events. From a welcome reception and an appellate court luncheon to law school events and a farewell reception, Texas hospitality was inabundance. Several law firms, the State Bar of Texas, the Hispanic National Barand others honored the jurists. Notable guests at the events included Bob Dunn,a past president of the State of Texas Bar, several ABA state delegates, stateand federal judges from throughout Texas. Dr. Carlo Romero, Ecuador’s consul general ad honorem in Houston, attended the farewell reception.

ABA ROLI in Ecuador is planning future study tours, which will allow Ecuadorian prosecutors, federal police and public defenders to connect withtheir U.S. counterparts. And, the visiting jurists have begun planning for asummer visit by Texas judges to attend a forum on judicial ethics and onproposed reforms to the Ecuadorian judicial ethics code.

To learn more about the ABA Rule of Law Initiative’s work in Ecuador, contact us at <rol@staff.abanet.org>.