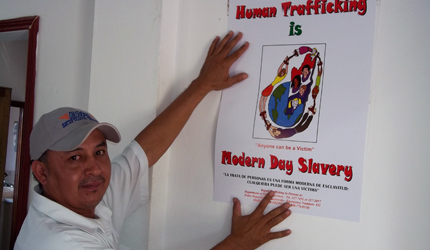 ABA ROLI participated with members of the Anti-Trafficking in Persons Information, Education and Communication Sub-Committee in the nationwide distribution of more than 1,200 copies of four different posters to educate the public about anti-human trafficking procedures. The posters, funded by the Government of Belize, were placed in a variety of locations, including bus terminals, hospitals, and schools, to maximize exposure.

The U.S. Department of State’s 2011 Trafficking in Persons Report identifies Belize as “a source, destination, and transit country for men, women, and children subjected to sex trafficking and forced labor.” While noting that Belize is taking significant steps to curb this horrific crime, the report adds that the rate of impunity for human trafficking offenders remains high. Indeed, from 2005 to 2011, the Belizean government failed to convict any individual for trafficking in persons, despite 2003 legislation—the Trafficking in Persons Prohibition Act—outlawing the activity.

In July 2010, the American Bar Association Rule of Law Initiative (ABA ROLI) launched its Combating Transnational Crime Program, which aims to assist local justice sector officials in their ongoing efforts to combat human trafficking and other transnational crimes. The program, which is funded by the U.S. Department of State’s Bureau of International Narcotics and Law Enforcement Affairs, seeks in part to enhance the Belizean public’s awareness of human trafficking by educating citizens on ways to report the crime as a victim or witness.

Though the Belizean government has struggled to effectively control human trafficking, its plans to develop the capacity to bring trafficking offenders to justice have recently come to fruition through two significant convictions.

On January 31, 2012, 54-year-old Narciza Orella became the first Belizean to be convicted for attempted human trafficking in approximately seven years. Orella had hired a young woman to work for her as a domestic “helper” in the western town of San Ignacio. Unbeknownst to her new employee, however, Orella planned to drag her into the commercial sex trade. When the young woman reported to work for the first time, Orella told her that she would serve as a waitress at a bar inside the home where Orella lived. While she was on the job, one of the bar’s patrons propositioned the young woman to have sexual relations with him for money. Shocked by the patron’s offer, she flatly refused. Rather than offering support for her new employee when she mentioned the man’s proposition, Orella told the young woman that “while you are young and pretty you should take on the opportunity of prostituting yourself.” The following day, the young woman quit her job and courageously reported the incident to the Belize Police Department. Orella was subsequently brought to trial and sentenced to 18 months in prison for attempted trafficking in persons at the end of January 2012.

And on February 10, 2012, 41-year-old Yolanda Garcia became the second person to be found guilty of trafficking in persons in Belize. A Honduran national and a naturalized Belizean, Garcia instructed a 17-year-old female employee to engage in sexual activity with patrons of her tavern. The minor, who had left high school to work for Garcia, testified in camera that Garcia told her that she was required to have sexual relations with customers as part of her job, despite her explicitly telling Garcia that she did not wish to do this. Garcia was sentenced to 12 months in prison.

These two landmark convictions demonstrate that Belize’s justice system is achieving progress in the face of rising criminal threats to security and the rule of law in Central America. ABA ROLI looks forward to providing additional assistance to Belizean justice sector officials as they continue to combat transnational criminal networks and attempt to build a more efficient judicial system.

To learn more about our work in Belize, contact the ABA Rule of Law Initiative at rol@americanbar.org.