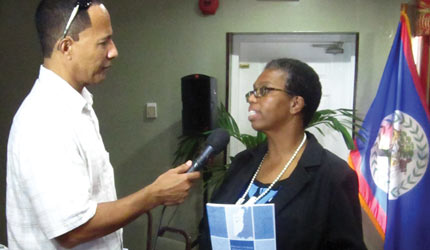 Findings of the 2011 Prosecutorial Reform Index for Belize indicate a challenging environment for the prosecution function. Belize received positive scores for only four of the 28 factors.

From July 4–5, the ABA Rule of Law Initiative (ABA ROLI) and the British High Commission in Belize cosponsored an anti-money laundering training for 42 judges, prosecutors and Financial Intelligence Unit (FIU) staff. Theworkshop, which was held in Belize City, supports efforts to combat organized crime in the country.

The interactive training, which employed case studies from other countries,covered various topics, including the history of money laundering, its economic impacts, and regional and global mechanisms for preventing and combating money laundering. The workshop concluded with a panel discussion on how Belize can address the challenge of illicit money being funneled into its banks and other institutions.

Training participants said that the workshop helped them better understand the consequences of money laundering and steps that can be taken to curtail thecrime. Patricia Arana, an FIU legal counsel, said that the training providedsome clarity about what has been accomplished and what still needs to be done.“We know where Belize is,” she said. “We [also] know where Belize has to go.”

ABA ROLI will provide the Belizean Supreme Court with citations of money-laundering cases from Commonwealth countries. Additionally, ABA ROLI,with continued support from the U.S. Department of State, will provide additional trainings to actors in the criminal justice system, including law enforcement investigators, prosecutors and judges.

To learn more about our work in Belize, contact the ABA Rule of Law Initiative at rol@americanbar.org.