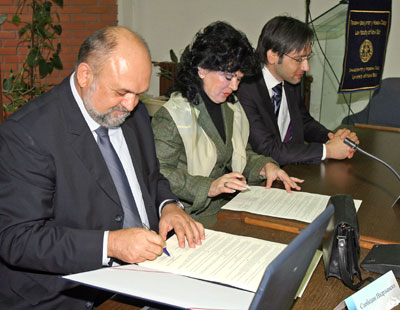 After three years, 11 rounds and more than 1700 law school students, the Court Internship Program (CIP), a joint program of the ABA Rule of Law Initiative (ABA ROLI) and the Young Lawyers of Serbia (YLS), has become a part of the curriculum in three Serbian law schools. As a result of a cooperative agreements signed by law schools and courts on in late 2007, the program will become a sustainable component of legal education in Serbia, and will institutionalize the reform efforts to bring practical experience to law students.

The CIP program began in 2004 to provide students the opportunity to observe criminal and civil trials, attend lectures by judges on criminal and civil court proceedings from the aspect of court practice, study court documents and whenever possible, follow investigative proceedings, as well as proceedings before the District Court in Belgrade and the Special Department of the District Court in Belgrade. On the final day of the program, students participate in a moot court simulation, acting in the roles of judges, prosecutors, and attorneys. By engaging in the program, their students have the opportunity to shadow and to learn from the most esteemed judges, lecturer-judges and Project Assistants—judges' associates and interns—who consistently participate and evaluate the moot court simulations. Students can also gain practical experience assisting with legal documents and court decisions, and familiarize themselves with the judicial and public prosecutorial professions, as well as with the court administration.

In addition to ensuring CIP’s financial sustainability, law schools have committed to participating in the successful curriculum of the program. After several talks, the schools recognized that it is in their interest not only to finance this program, but to actively participate in its development.  By the end of the school year, program manuals containing relevant court decisions and documents from criminal and civil court proceedings will be created in Belgrade. The manuals, created by Professors and YLS Project team members are an important educational tool and reference material for students participating in the program. Novi Sad already has such a Manual, which was used during the 12th and 13th round of the CIP. In addition, Law Schools are obligated to determine, by the end of the 2007-08 school year, a way to credit students for their participation in the project in accordance with the rules of Bologna Process.

The recent integration of the CIP program into school curricula coincides with the opening of the twelfth round of the program, the first to be fully financed by the law schools.  This round provided 106 students the opportunity to spend 10 organized days in a court or a Public Prosecutor's Office. This was the first of four rounds of the 2007-08 school year on the basis of the Cooperative Agreements. The program was conducted in the Belgrade District Court and all five Municipal Courts in Belgrade, the Novi Sad District Court and the Novi Sad Municipal Court.