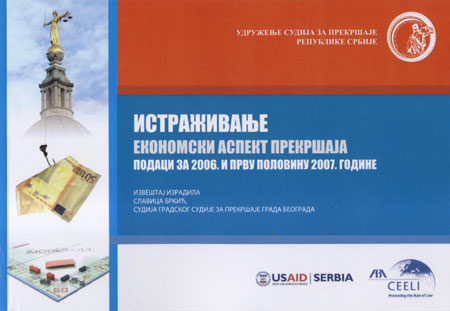 In March 2008, Belgrade’s Media Center, the Association of Magistrates of the Republic of Serbia (MAS), and ABA Rule of Law Initiative (ABA ROLI) organized the roll-out of the Economic Aspect of Misdemeanor Court Survey. The survey explored the economic impact of cases fully executed by first or second instance courts in 2006 and the first six months of 2007 in the entire territory of Serbia (excluding Kosovo and Metohija). The results of the survey demonstrated that if properly applied, the misdemeanor court could have contributed 48.6 million Euros to the State Budget in 2006.

The roll-out event was opened by Snezana Malovic, State Secretary of the Ministry of Justice, whose representatives where also involved in the survey.  Besides misdemeanor judges, about 30 representatives of other State bodies, mostly Ministries, who are authorized to initiate misdemeanor procedures, where present at the event, including the Ministries of Finance, Labor, Interior, Social Welfare and Environment. 10 media outlets reported from this event. The results of the Survey were presented by Zoran Pasalic, President of the Managing Board of the MAS.

This survey compiled information on the following: number of completed cases, number and amount of total collected fines and executed prison sanctions, number of cases in which sanctions were lessened, and the number of cases waiting for forced execution at the end of 2006 and on June 30, 2007. The survey also measured the extent to which individuals, business and other entities are subject to misdemeanor sanctions in order to determine whether there is a need for the eventual change of legal provisions.

The results of the survey demonstrated that the court could contribute much to the Serbia state budget, more than any other judicial bodies contributing to the Budget of the Republic of Serbia. It would be the third largest source of revenue, just after taxes and customs (misdemeanor bodies contributions all the courts finance themselves, all the Prosecutors’ Offices in the country, The Republic Public Defenders' Offices, as well as the Supreme Court). The Survey financially justified the operation of the Misdemeanor Courts’ existence and the upcoming integration into the judiciary in the near future will lead to more complex cases, both for judges and initiators of misdemeanors.

The Survey was designed by Slavica Brkic and Zoran Pasalic, Belgrade misdemeanor judges, in cooperation with ABA ROLI Staff Attorney Nikola Vojnovic.  The research period extended from November 2007 to February 2008, with 143 municipal misdemeanor bodies and 10 second instance panels participating in the project.