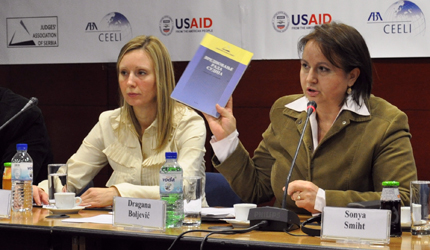 Feedback on the event was universally positive and the JAS has committed to organizing additional caseweighting roundtables in the near future.

The ABA Rule of Law Initiative (ABA ROLI), in cooperation with the Judges Association of Serbia (JAS), successfully organized a video conference on case weighting in Belgrade’s Sava Center on January 16. Case weighting is a critical tool for determining how many judges are needed in the court system and for apportioning cases among judges. Topics discussed included how case weighting is applied and an overview of two different methodologies for developing a case weighting system.

Executive Director Sheryl Loesch of the International Association of the Court Administration (IACA) took part in the conference, discussing the role of court administrators in U.S. Federal Courts and the role of the newly-formed IACA. Other participants included Dragana Boljevic and Omer Hadziomerovic, both of the Managing Board of Judges Association, and representatives from the Ministry of Justice and ABA ROLI. The event was attended by a good number of Serbian journalists and six television stations covered the event.

During the event, case weighting was presented as an independent international tool used to optimize court operations. The concept was well received by Serbian judges and relevant actors in the Serbia court system. In fact, feedback on the event was universally positive and the JAS has committed to organizing additional case weighting roundtables in the near future.

To learn more about our work in Serbia, contact the ABA Rule of Law Initiative at rol@staff.abanet.org.