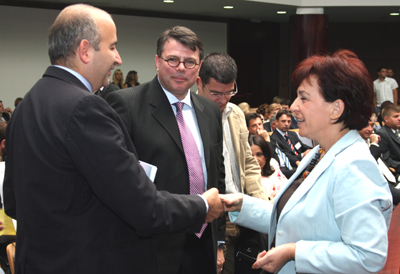 Vida Petrovic - Skero, the President of the Supreme Court of Serbia, speaking with members of the international community at the JAS conference.

On June 2, 2007, the Judges’ Association of Serbia (JAS) and the Prosecutors’ Association of Serbia organized and hosted an International Conference titled “Independence of Judiciary and Challenges of Transition.”  The conference, funded in part by the ABA Rule of Law Initiative in Serbia, took place at the Belgrade Palace of Justice.

In keeping with its goal to promote an independent, well-trained judiciary that meets the highest standards of integrity, the Rule of Law Initiative's Serbia office has partnered with JAS, providing both financial and technical assistance since 1997.  As a result, JAS has grown from an organization founded by five Serbian Supreme Court judges in 1996 into a large association of more than 1600 judges capable of organizing international conferences and playing a central role in judicial reform in Serbia.