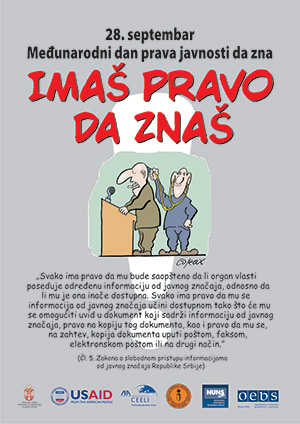 A Serbian cartoon depicting the theme of Right to Know Day. In English, it reads, “Enough of this. I have the right to know.

Transparency and access to information are key elements in ensuring public accountability in transitional societies. In Serbia, information about public initiatives and the government too often fails to reach its intended audience—the citizens. On September 26, the ABA Rule of Law Initiative (ABA ROLI) and the United States Agency for International Development (USAID) supported International “Right to Know” Day activities in Serbia. The day, which is celebrated worldwide, promotes open government and transparency.

To coincide with international events, the Republic of Serbia’s Commissioner for Information of Public Importance hosted a freedom of information awards ceremony that was held in Belgrade’s media center. The Serbian Chamber of Commerce was bestowed the 2008 honor, in conjunction with the Network of Regional Chambers of Commerce. Honorable mention certificates were presented to the First Municipal Court in Belgrade, the Secretariat for Information of the Autonomous Province of Vojvodina and the City of Šabac. These institutions were selected by a nine-member awards committee for most closely fulfilling the award’s criteria of increasing the public’s access to information.

The event, which was broadcast by direct video link to the media center in the city of Nis, was attended by journalists from 18 media organizations and representatives from more than 40 state institutions, civil society groups and international organizations.

The event and its associated activities are part of efforts in Serbia by ABA ROLI and USAID to foster public awareness about access to information. Other activities include partnering with the Standing Conference for Towns and Municipalities on training sessions for public information officers to improve transparency practices at the local level.