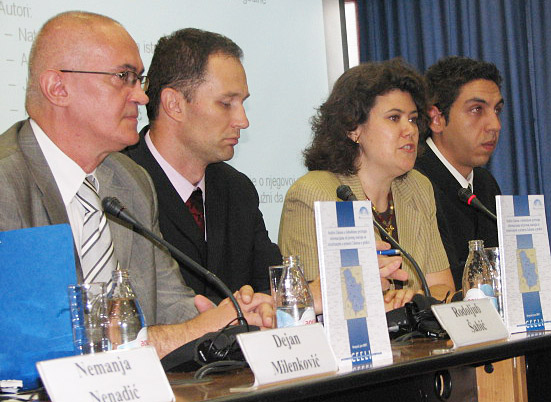 On June 7, 2007, the ABA Rule of Law Initiative released its assessment of Serbia’s law on Free Access to Information of Public Importance (FOIA) at an event held at the SAVA Center in Belgrade. Julia Roig, country director of the Rule of Law Initiative's Serbia office, opened the roll-out ceremony, which included comments by staff attorney Damir Milutinovic and Serbia’s Public Information Commissioner.

Serbia’s FOIA law allows ordinary citizens, including members of the media and non-governmental organizations, to request and view information held by public bodies.  The Rule of Law Initiative’s assessment contains an in-depth appraisal of the law resulting from a series of interviews and analyses of 26 state institutions from Belgrade, Novi Sad, Kragujevac and Nis on the implementation of FOIA.  The report compares Serbia’s FOIA law with international standards and makes specific recommendations to harmonize the Serbian FOIA with these standards.  The assessment also highlights the strengths and weaknesses of certain Serbian FOIA provisions and advocates amendments to strengthen the existing law.  This new assessment is expected to influence future FOIA reform efforts in Serbia and will help to ensure that public institutions operate in a more transparent and open manner.

Since FOIA was adopted in 2004, the Rule of Law Initiative's Serbia office has promoted the law by conducting a public outreach program to train representatives of the judiciary, the prosecution, media outlets, and non-governmental organizations to use the law. The office has also organized the International Right to Know Day programs for over 50,000 citizens. The results of this outreach are already evident, as the number of FOIA requests tripled in 2006.