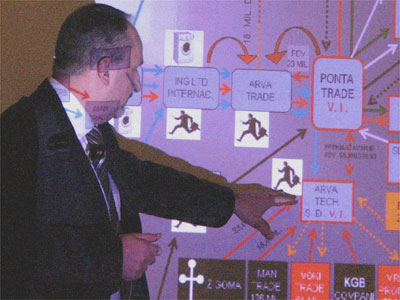 In last 8 years Serbia has experienced an intensive transition period in its economy. Almost 90% of state companies were privatized in this period. Unfortunately, this process has invited a higher rate of financial crime and money laundering. In some cases state companies were purchased with money received from illegal activities and in turn these companies were then used as “boiler firms” for money laundering. Prosecutors, police and judges have not had the skills, knowledge and tools to process these cases.

ABA ROLI’s seminars examined the overarching issue of financial crime as an impediment to development and how to specifically combat these crimes, as well as to offer best practices and capacity building exercises and training in investigating techniques for more than 100 participants. The two day seminars were jointly organized with the U.S. Department of Justice Criminal Division Resident Legal Advisor’s Office at the U.S Embassy in Belgrade, the Rule of Law and Human Rights Department of the OSCE Mission to Serbia.

Renowned experts, judiciary officials and government officials were present and facilitated discussions on concrete issues and methods in combating this problem, and participants were encouraged to analyze hypothetical case studies. These seminars which took place in Novi Pazar, Smederevo, Vojvodina and Belgrade also served as a platform upon which regional judiciaries may establish and further their cooperation.

Noted participants include: Miroslava Milenovic who presented “Cooking the Books: the ABCs of Financial Investigation”, and Zoran Antic, the acting District Prosecutor in Smederevo who presented “Typical fraud schemes and risk indicators, Basic investigation tools”. On the second day of training Hana Andonov of PriceWaterhouseCoopers-Serbia facilitated a discussion on Financial reporting systems: Basic principles (management accounting and reporting vs general accounting, governance and procedures) Balance sheets, Profit and Loss and Cash Flow Statement, Internal and external users – different perspectives, Basic audit techniques, Vlatko Bozovic from the Administration for the Prevention of Money Laundering  discussed the role of the Financial Intelligence Unit and case analysis, and Marko Bozovic from the Ministry of interior UBPOK presented the Investigative capabilities of the Organized Crime Department and case analysis.