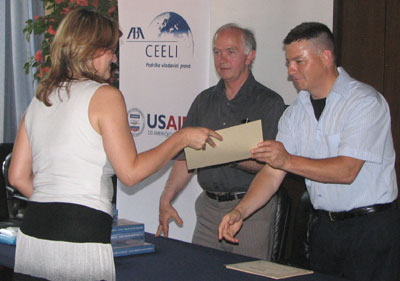 Since the ratification of the European Convention on Human Rights in March 2004, the European Court of Human Rights has dismissed nearly 50 percent of the 2,729 submissions brought against Serbia. Of those submissions on which the Court did make a ruling, only 16 were upheld as violations of the Convention. This data demonstrates that Serbian attorneys are not adequately prepared to process cases before the European Court of Human Rights. With this in mind and with the support of the American Bar Association Rule of Law Initiative (ABA ROLI), the Network of Committees for Human Rights in Serbia (CHRIS) and the Niš Bar Association sought to prepare a new cadre of lawyers with the skills necessary to provide competent representation before the Court in Strasbourg.

A group of 27 attorneys, all members of the Niš Bar Association, received intensive training on the practical aspects of representation before the European Court of Human Rights. CHRIS prepared the curriculum and selected the trainers, and then prepared the materials with ABA ROLI. The Niš Bar Association selected the most appropriate participants from their membership. During the six two-day sessions, participants attended lectures by eminent attorneys, judges and professors on topics such as the rights of life, liberty and security and the prohibition of torture. In addition to extensive training in the Court’s mandate, the attorneys also received training in procedural aspects of Court. The attorneys are now prepared to advise, submit applications on behalf of and represent clients before the European Court of Human Rights. The program concluded on June 22 with a mock trial and a certificate ceremony.

The program was deemed successful, having earned high marks from the participants for its  usefulness, the quality of the lectures and its organization. In fact, 80 percent of participants reported that the seminar completely fulfilled their expectations. With a greater number of Serbian attorneys now qualified to go before the Court, the Niš Bar Association hopes to soon report a higher number of successfully-tried human rights cases and greater progress in the fight for the rule of law.