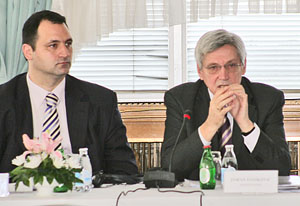 Serbian Minister of Justice Zoran Stojkovic, right, speaks while Professor Milan Skulic, secretary general of the Strategy Implementation Secretariat Secretary, listens on during a roundtable discussion on the guiding principles for laws on the Serbian judiciary organized by the Rule of Law Initiative.

A significant shift in the political and legal landscape is occurring at the moment in Serbia, with the adoption of a new constitution in late 2006 and parliamentary elections held in January 2007. With the formation of a new government in progress and new legislative efforts underway, the Rule of Law Initiative seized the opportunity to further its program goal of implementing legal reforms necessary for the functioning of an independent judiciary. In early 2007, the Serbia office provided technical advice to the working group charged with drafting guiding principles for laws on the judiciary by creating a comparative analysis between relevant international standards and provisions of the Serbian Constitution and its strategy on judicial reform.

In late February, in partnership with the Strategy Implementation Secretariat and OSCE, the Rule of Law Initiative organized a roundtable discussion on the guiding principles for laws on the judiciary. The conference provided a forum for the working group to present its draft of its guiding principles for laws on the judiciary and to solicit comments and input from other members of the judicial and prosecutorial profession.

Serbia Country Director Julia Roig opened the conference, together with the Serbian Minister of Justice, the Supreme Court president, and the president of the Judges' Association of Serbia. Two experts from Romania spoke at the conference on judicial independence in their country. Participants included presidents of district and municipal courts in Belgrade, public prosecutors offices, members of the Supreme Court of Serbia, the Judicial Training Center, and international organizations and embassies.