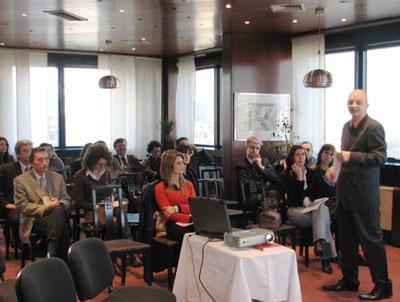 A large crowd attends a Rule of Law Initiative training session in Belgrade for Serbian prosecutors on the country's recently passed Criminal Procedure Code, which takes effect in June 2007.

A three-day seminar held in Belgrade in early February marked the close of the first round of training for prosecutors throughout Serbia on the Criminal Procedure Code (CPC). Fifty five prosecutors, including the Belgrade district prosecutor, attended the final training session, part of the Rule of Law Initiative's larger effort to promote continuing legal education for lawyers throughout Serbia.

Enacted into law by the Serbian legislature in June 2006, the CPC will take effect in June 2007. The new code represents a dramatic departure from Serbia's prior regulations, presenting prosecutors with new roles and methods of operation. Under the CPC, prosecutors are now charged with conducting investigations - a role historically assigned to investigative judges.

Responding to the need to prepare prosecutors for the coming changes, the Rule of Law Initiative developed a series of training courses with the Prosecutors' Association of Serbia (PAS) and conducted three-day conferences in six cities throughout the country. The Rule of Law Initiative expected to train 180 prosecutors throughout the first round of CPC training; however, a total of 415 prosecutors (well over 50% of the total number of prosecutors in Serbia) attended the 3-day courses, where they learned about DNA analysis, interrogation techniques, crime scene investigation, plea bargaining, narcotics analysis, and the new role of prosecutors in investigations.

The training was enthusiastically received, with many participants calling for such trainings to become a permanent fixture of Serbia's continuing legal education landscape. Starting in March, ROLI Serbia will commence a second round of CPC training, covering topics such as financial crimes and special investigation techniques.