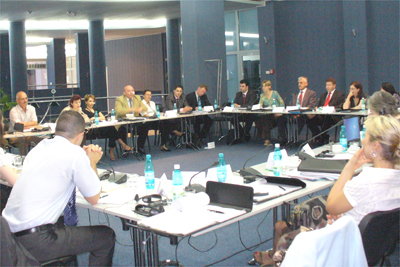 Constanta, June 6-8, 2007. Colloquium on Pretrial Detention and Search Warrants, sponsored by USDOJ/OPDAT in collaboration with the ABA Rule of Law Initiative in Romania

The U.S. Department of Justice Office of Overseas Prosecutorial Development, Assistance, and Training (USDOJ/OPDAT), in collaboration with the Rule of Law Initiative’s Romania office, organized a colloquium titled “Pretrial Detention and Search Warrants—Practical Aspects,” on June 6–8, 2007, in Constanta, Romania. The colloquium concluded a technical assistance project related to court practice in applying legal provisions on pretrial arrest and search warrants.

The list of participants included members of two multidisciplinary working groups—one consisting of practitioners from Bucharest, the other involving magistrates from around Romania— and several attendees from the seminars organized by the Rule of Law Initiative in 2006. Other participants included representatives from the Superior Council of Magistrates, from the National Institute of Magistrates, and from the commission in charge of revising the new Criminal Procedures Code.

The colloquium agenda included a discussion of the report released by the Rule of Law Initiative (posted online at www.abarol.org and distributed to all Romanian courts of appeals earlier this year) reviewing difficulties still outstanding and potential new concerns resulting from Romania’s accession to the European Union. At the initiative of project coordinators, U.S. District Judge Virginia M. Hernandez Covington (Middle District of Florida) gave a presentation on benchbooks and helped initiate a spirited discussion on drafting an arrest and search warrants benchbook for Romanian magistrates.