On October 7, the ABA Rule of Law Initiative (ABA ROLI) hosted a half-day symposium exploring global perspectives on criminal law reform. About 50 people attended the event in person while another 84 people tuned in to a live webcast of the discussions. ABA ROLI Director Elizabeth Andersen opened the symposium by welcoming speakers and attendees. Jessie Tannenbaum and Ashley Martin of ABA ROLI presented a comparative analysis of criminal defense advocacy in the Balkans and shared details about ABA ROLI’s U.S. Agency for International Development-funded program in the region. 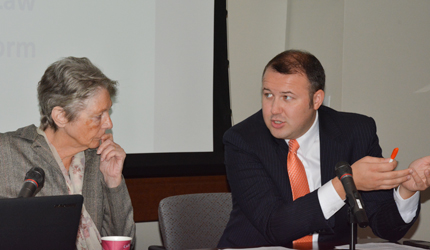 Panel discussions addressed criminal law reforms in the Balkans and the region’s integration into the European Union; as well as transitions from an inquisitorial to an adversarial criminal justice system, highlighting the experiences of Rwanda, Ukraine, the Balkans and Latin America.