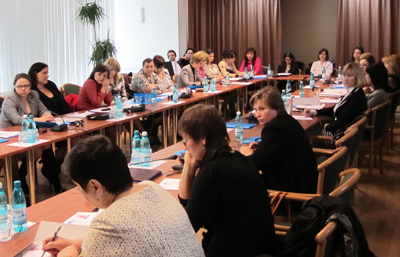 Women attorneys in Moldova face significant gender discrimination in their profession. Examples of unfair treatment of women lawyers at the hands of male lawyers and clients are rife. A female defense lawyer lost a male client after he claimed the case was “too complex,” requesting a male attorney instead. Another female lawyer was met with harassment and outright revolt from male counterparts when she was promoted as a supervisor, while many more have faced defamation and various forms of discrimination.

To address the gender inequality in the legal profession, the ABA Rule of Law Initiative (ABA ROLI), in cooperation with the Moldovan Association of Women in the Legal Profession, organized a symposium, where about 60 women judges, prosecutors, defense attorneys and law students shared their experiences and views. Participants of the late-April symposium said they were excited to have an opportunity to share their concerns, challenges and successes, as well as to plan to tackle obstacles they face in their profession. They also emphasized the need to continue the dialogue. Participants developed an agenda for a subsequent meeting, making the symposium a standing forum rather than a one-time event.

To learn more about our work in Moldova, contact the ABA Rule of Law Initiative at rol@americanbar.org.