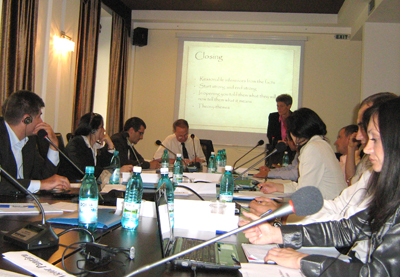 Moldovan criminal defense attorneys learned about effective opening and closing statements and direct and cross-examination during the three-day training.

Later in the month, six of the defense attorneys participated in a mock trial competition organized by the U.S. Embassy’s Resident Legal Advisor (RLA) Office, along with four judicial and prosecutorial candidates from the National Institute of Justice who had received separate training from the RLA Office. The mock trial, which was conducted in English, involved a currency counterfeiting, corruption and money laundering case that the RLA Office developed. The Honorable Justo Arenas, chief magistrate judge of the U.S. District Court for the District of Puerto Rico, presided over the trial competition. The U.S. Embassy videotaped the proceedings for training purposes.