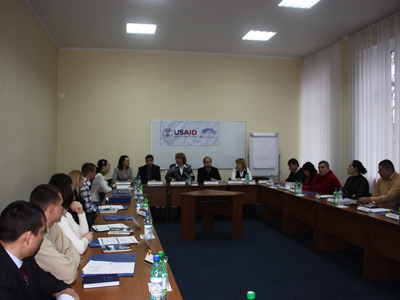 Training at the National Institute of Justice, Moldova.

The ABA Rule of Law Initiative (ABA ROLI), in partnership with the National Institute of Justice (NIJ), is conducting a series of trainings to enhance judicial capacity in Moldova.

ABA ROLI collaborated with the NIJ and the Enforcement of Judgments Division to conduct the first two trainings, which were held in late January and early February. A total of 54 newly-appointed enforcement of judgment officers from Chisinau and the surrounding regions were trained on procedural requirements to enforce judicial rulings under Moldovan law. The third training, held on February 24, was attended by 32 probation workers and focused on probation rules and procedures for cases involving minors. The training also discussed evidence collection methods.

ABA ROLI and the NIJ will continue to offer similar capacity-building trainings. Through June, ABA ROLI will sponsor and assist with 16 additional trainings for judges, prosecutors, court personnel and law enforcement officers. The trainings will be part of the NIJ’s continuing legal education curriculum and will cover issues such as judicial ethics, the European Convention on Human Rights, law enforcement procedures, court administration and budget organization. ABA ROLI is assisting the NIJ in preparing materials for the trainings, which will better position legal professionals to uphold Moldovan law and to contribute to a capable national justice system.