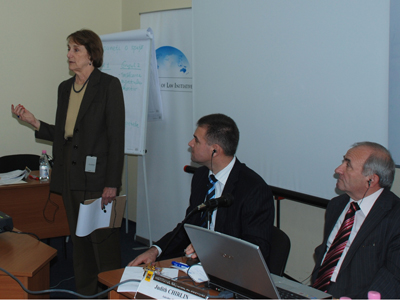 Judge Chirlin discussed the need for and process of identifying the best teaching method for specific students, which should suit their learning styles. The training covered various teaching approaches, developing course objectives and identifying content. The participants, working in smaller groups, practiced developing a mini-course, which they then taught to the group. Emil Darii, ABA ROLI institution building advisor in Moldova, assisted with the training.

At the end of the training, Fistican said that they have already had queries from other trainers—some 65 people—who want to take this training if it is offered again. She said she would like all NIJ trainers to receive similar training since it was “extremely useful in making us more effective at conducting trainings and understanding our students”.

The NIJ provides both initial training to judicial and prosecutorial candidates and continuing legal education to sitting judges and prosecutors. ABA ROLI’s work to improve the quality of the justice system in Moldova is funded by the U.S. Agency for International Development.