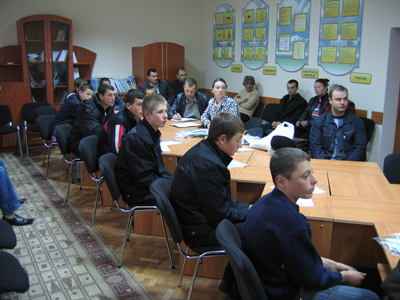 Some of the participants learn about their rights and responsibilities under Moldovan law.

In September 2008, the ABA Rule of Law Initiative (ABA ROLI), in cooperation with the Office of the President of the Orhei District, sponsored a one-day event on minors’ rights and responsibilities under Moldovan law. Fifty at-risk teens participated in the multi-sectoral event, the first of its type in Orhei District.

The participants came from various socially disadvantaged groups and all had a history of delinquent behavior, though not serious enough to warrant imprisonment. Valeriu Covas, ABA ROLI’s Orhei-based traveling lawyer, explained to the minors their rights and obligations under Moldovan law. He also discussed how the law is enforced against minors. Orhei public administrators told the minors about social, legal and educational services and available hotline assistance. A psychologist addressed ways to constructively deal with negative emotions, while a medical doctor discussed the dangers of drug, alcohol and tobacco use. A journalist and a former prisoner made presentations on misleading media influences and on the difficulty of re-integration into society after a jail term, respectively. A priest also spoke about available spiritual support.

At-risk teens in Moldova often perceive convicts as leaders who are “cool” and strong. To expose this stereotype, the event concluded with a guided tour of a local penitentiary in Branesti, where the participants saw prison life first-hand and where they were able to ask questions of the penitentiary director. The teens left with a new understanding of the Moldovan legal system and were provided with materials on minors’ rights and responsibilities for further reference.