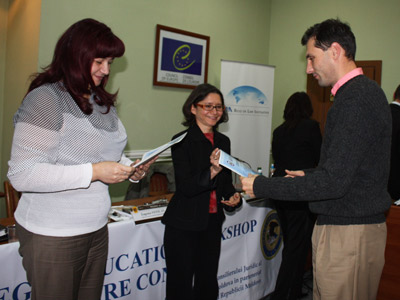 From October 21—22, the ABA Rule of Law Initiative (ABA ROLI) in Moldova, in cooperation with the U.S. Embassy resident legal adviser and the National Institute of Justice (NIJ), organized two day-long trainings on local pretrial detention laws and associated international standards. A total of 36 judges, prosecutors and defense attorneys attended the trainings, which were supported by the U.S. Department of State’s Bureau of International Narcotics and Law Enforcement Affairs.

Justo Arenas, chief magistrate judge from the U.S. District of Puerto Rico, Raisa Botezatu, deputy chief justice and chairman of the Criminal Chamber of Moldovan Supreme Court, and Ruslan Popov, from the General Prosecutor’s Office, moderated the discussions, which the NIJ hosted.

“I believe such trainings are useful, as they bring together judges, prosecutors and defense attorneys, and allow them the opportunity to debate important issues while applying international and national standards as well as basic principles in human rights,” said Alexandru Gafton, a district court judge from Hincesti.

In addition to covering relevant national and international principles, the training also expanded participants’ understanding of the role of prosecutors, defense attorneys and judges in opposing, seeking or deciding on a request for pretrial detention. Participants presented their oral arguments in a mock pretrial detention hearing, which was videotaped for review and critique.

Training materials, including a manual on pretrial detention-related national laws and international standards, Moldovan Supreme Court jurisprudence on pretrial detention and case law of the European Court of Human Rights, were distributed both in hard and electronic copies.