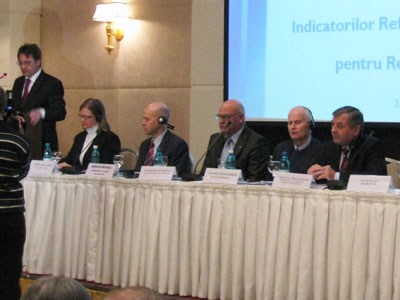 Judiciary Reform Index is available in English and Romanian.

The Moldova office launched its second Judiciary Reform Index (JRI) at a program on June 29, 2007, in Chisinau. The Presidents of both the Superior Council of Magistracy and Supreme Court of Justice, as well as the Executive Director of the new National Institute of Justice, all spoke at the program, along with JRI Assessor Thomas Cope and Initiative Country Director Corinne Smith. More than 100 leaders of the judiciary, the legal community, local and international NGOs, and the press attended. The JRI is the Rule of Law Initiative’s assessment tool that analyzes a country’s legislation and actual practice based on thirty factors that generally define international standards for an independent and effective judiciary.  Each factor is assigned a positive, negative or neutral correlation based on how closely a country’s conditions conform to these standards.

The 2007 JRI evaluated progress in judicial reform in Moldova since the 2002 JRI.  Assessor Cope, who was also the assessor for and principal author of that JRI, reviewed applicable legislation and interviewed more than sixty judges, lawyers, prosecutors, law professors, members of civil society and media representatives with the support of the Moldova office.  Olga Ruda of the Initiative’s Office of Research and Program Development provided significant editorial assistance.

The report indicates that since 2002, the judiciary has improved in the areas of budget input, case assignment, objective advancement criteria and the distribution and indexing of laws.  It declined in the assurance of immunity for judicial decisions, objective criteria for the removal and discipline of judges, the system of appellate review, effectiveness of judicial associations and judicial conduct complaint process.  In most areas, ratings remain unchanged, although this did not mean that underlying conditions were unchanged, rather that changes were insufficient to alter the correlation.  The impact of November 2006 amendments to five major laws governing the judiciary and recent changes in several key judicial leadership positions still remains to be seen.  More than half of the factors remain neutral. While the judiciary continues to receive a positive assessment in minority and gender representation and jurisdiction over civil liberties, it still receives a negative assessment in the adequacy of physical, financial and staffing resources, judicial job security and salaries, and management of and access to case materials, judicial decisions and trial records.  There is also a continuing lack of transparency in the rendering of judicial decisions and in the disclosure of improper influences over the judge.

The Initiative believes that the 2007 JRI is particularly important and timely in light of upcoming support for the judiciary through the Millennium Challenge Corporation Threshold Country Program (MCC).  The Moldova office will work closely with the MCC implementers and judicial leaders on further reform efforts and hopes that the 2007 JRI will enable the judiciary, public authorities, civil society and international donors to target assistance efforts more effectively.

The JRI is available in English and Romanian.