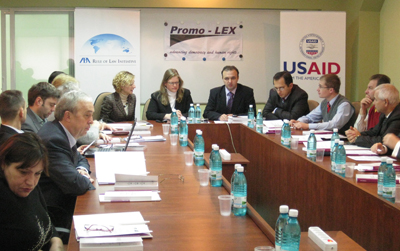 Representatives of the Moldovan government, police and military, as well as religious figures and civil society members, attended a human rights roundtable in November 2009.

Ion Manole, Promo-LEX director, said, “From the findings of Promo-LEX and others, we can conclude that during 2007–2008, there were a number of systematic problems that led to violation of various rights guaranteed by international treaties to which Moldova is a party.” He said that the existing legal framework requires that complaints of illegal treatment be fully examined. However, he added, investigations have in many instances and for various reasons proceeded “slowly and inefficiently”.

A total of 35 people, including representatives of the Moldovan government, police and military, as well as religious figures and civil society members, attended the event. The report examined developments in key human rights categories including the right to liberty and due process, and property, assembly and electoral rights. While the report uncovered some progress, such as reducing the number of people deprived of liberty, it identified serious violations of peoples’ rights in all categories.

The report included data from the Transnistria region, concluding the situation for its inhabitants remains grave. Findings showed that people in Transnistria do not benefit from social assistance and state protection, making deprivation of the right to liberty in the region more than six times as much as the average across Council of Europe member countries.

Promo-LEX has been an ABA ROLI partner for several years, providing legal assistance to the vulnerable citizen groups in the country and monitoring the human rights situation. ABA ROLI’s work supporting Promo-Lex and promoting civil and human rights groups in Moldova is funded by the U.S. Agency for International Development.