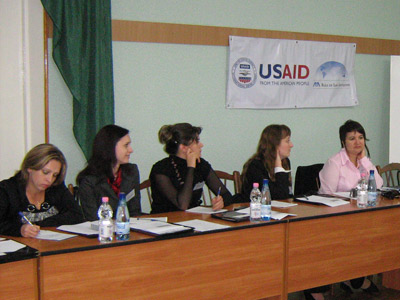 The scant official statistics indicate that pedophilia and other forms of child abuse are increasing dramatically in Moldova. Available studies also indicate that Moldovan society, law enforcement agencies and relevant state agencies are unprepared for or unwilling to face this grave issue.

“It’s appalling to hear from some officials that the alarmingly increased number of raped, beaten or murdered children is not an urgent issue for Moldova,” said Daniela Popescu, president of the NCCAP. “Some policemen still consider that raping a minor daughter by her father or grandfather is a mere family issue.”

The training helped participants to “have a broader perspective on the issue, realize its true proportions and seek efficient legal remedies through action,” said M. Uglov, one of the trainees.

NCCAP legal specialists and psychologist conducted the training. The NCCAP, a prominent Moldovan NGO and ABA Rule of Law Initiative (ABA ROLI) partner, provides pro bono legal services and social aid to child victims of abuse. With ABA ROLI’s financial support, the NCCAP will publish a guidebook for legal hearings involving children, which will be first of its kind in Moldova. The guidebook will be distributed to state and law enforcement agencies, the mass media and NGOs.

The trainings, guidebook and advocacy work the NCCAP is engaged in are conducted under a one-year U.S. Agency for International Development-funded ABA ROLI program to provide legal assistance to child abuse victims, which will continue until the end of this month.